Spies of the Balkans 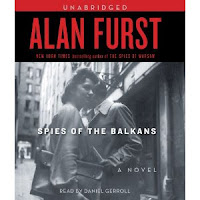 Alan Furst is back creating another morally ambivalent, atmospheric thriller featuring a hard-bitten foreign protagonist. This time it is the Greek Costa Zannis, who is remarkably similar in his attitudes and cigarette smoking to the French, Hungarian and Dutch protagonists of Furst's earlier novels.

We listened to this on audiobooks during a road trip and it was entertaining enough, though Furst has clearly fallen into purely formula writing. Watch a few old movies (he even refers to one character as a real cinematic aviator), research a relatively obscure location (Salonika, Greece in this instance), insert above-mentioned hard-bitten protagonist, add a few lady friends, and wrap everything in a smoky nostalgia that makes it as blurry and comforting as the black-and-white movie you started with.

I happen to like a lot of this, particularly the obscure locations. Furst plays this one to the hilt, with Zannis shuttling off to Belgrade and Budapest, with a quick dash to Paris, and dispatching loved ones to Istanbul and Alexandria, while carrying on three love affairs in Salonika. Some of the romantic scenes were amazingly clumsy, bordering on the adolescent. And in an audiobook you don't have the freedom to skim over the embarrassing parts.

The reading by Daniel Gerroll was easy to listen to and follow. His comfortable pace was well-matched to Furst's unhurried narrative style and he was consistent in his characterization of Zannis and other main figures, so there was virtually no confusion in a book populated by people with names that are strange to our ears. No small feat.

Furst belabors the history a bit more in this book than he has in some earlier works, probably because this location and the action he describes (Greece girding for the Nazi assault) is so obscure to American readers. He is at his best describing the fin du monde atmosphere of a country coming under siege and the desperation that accompanies it. The story of an underground railroad smuggling Jews out of Germany to freedom, in Turkey of all places, was moving and rich in historical context.

Less successful was Furst's attempt to show a Gestapo officer at work, which seemed to owe too much to Hans Fallada's Every Man Dies Alone to be called original.

We bought the audiobook at Books a Million in Tennessee because we inadvertently left behind the audiobooks we had bought for the trip in our hotel the first night. Out of the dozens of audiobooks on sale, it was the only one we felt both of us could enjoy and that proved to be the case.
Posted by Darrell Delamaide at 1:33 PM