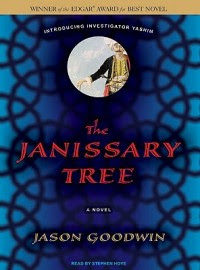 Jason Goodwin's debut novel with the 19th-century investigator Yashim Togalu won the coveted Edgar Award for Best Novel. I've had it on my shelf for a while, but wanted to read it after I was assigned Goodwin's latest novel to review for the March issue of the new Washington Independent Review of Books.

I'll keep this blog short and save more about Goodwin and his background for the review. The Janissary Tree is a very literate, textured novel, rich in detail about the exotic Ottoman court, the Sublime Porte, without letting any of it overwhelm a lean mystery. Goodwin's main gimmick is to make Yashim a eunuch and to successfully overcome a certain natural squeamishness about this subject. It enables Yashim to enter the titillating world of the harem, to consult with the sultan in the Seraglio itself, and to move easily in a demi-monde of ambivalent sexuality, while keeping him an outcast and a loner.

The plot in this debut turns on the possibility of a resurgence of the Janissaries, the elite palace guard that was brutally suppressed 10 years before the time of this novel in 1836. The plot is developed with panache and some suitably gory murders. Intimations of a three-dimensional Yashim also emerge in this debut, presumably to be amplified in subsequent novels, so that his castration is something more than a gimmick to get your attention.

Istanbul -- Goodwin usually refers to it by this name because he is writing from a Turkish point of view though it was known as Constantinople in Europe until Ataturk officially changed the name in the 1920s -- is a marvelous setting for any novel, and Goodwin knows how to use it to great advantage. It is a quick, rewarding read, and I look forward to the sequels.
Posted by Darrell Delamaide at 10:02 AM