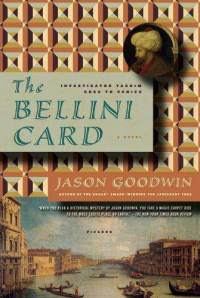 This is the third book in Jason Goodwin's Yashim the investigator series that I am reading in preparation for reviewing the fourth, An Evil Eye, which will be published at the end of this month. As with the previous two, I will keep my comments on this short and save my general observations about Goodwin and the series for the review, which will be cross-posted here.

Suffice it to say that Goodwin keeps his great sense of place even in shifting the action of this novel to Venice instead of Istanbul. In fact, he largely succeeds in portraying La Serenissima as an historical suburb of Constantinople, an empire that temporarily borrowed the culture and glory of Byzantium for what turned out to be a brief flowering.

The 19th century Venice described here is a poor and decaying place, stifled by the Austrian occupation. The moral corruption equals the physical, which Goodwin renders well by contrasting the stagnant Venetian lagoon and its ill humors with the clean, bracing air of the Bosphorus. It is a time of transition in the Ottoman empire, too, as a young, new Sultan leads the Turkish empire into its final decline.

Yashim remains an appealing character, but unfortunately Goodwin chose to make Palewsky the center of attention for most of the novel. This Polish ambassador without a country, the closest thing Yashim has to a Dr. Watson, has always been a weak and poorly drawn character. Nor is Goodwin able to use this opportunity to flesh him out. He remains a dull and largely dull-witted personality.

There are other flaws. Goodwin introduces a courtesan who Palewsky's guide hires to warm his bed. She of course turns out to be a wonderful person, which is already a stretch, but she apparently, despite her profession, lives at home as a well-respected member of her family and a devout churchgoer. Sorry, can't suspend my disbelief that much.

Goodwin seems to delight in having his eunuch detective bed the beauty in each book, without probing into the physical and emotional sensitivities this entails. They are invariably enamored of him for reasons the reader is left to guess at. The byzantine plot is even murkier than usual this time. The final climactic scene -- Yashim's hand to hand fight with a Tatar in the mud of a canal trench emptied for dredging -- matches the earlier books with struggles in a tannery and large underground cistern, but is hard to follow.

Goodwin clearly wanted to vary the formula a bit by changing venues. We still have Yashim cooking his lovely Ottoman concoctions, still have the obligatory visit to the valide -- the original Sultan's mother and grandmother to the new Sultan, and the Greek vegetable vendor whose dialogue is incongruously rendered in ungrammatical English. A little more variation might have helped. Goodwin seems more attached to these little rituals than his readers might be.

Would I still be reading these but for the review? Probably not. Let's see what the new one has to offer.
Posted by Darrell Delamaide at 8:59 AM