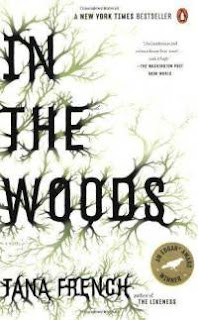 Tana French's police procedural set in Dublin won an Edgar and has genuine literary ambitions, not pretensions. It is a layered novel with a depth of characterization seldom found in mysteries and a rare descriptive power.

That said, I have several issues with it. In terms of style, I find it generally overwritten, with too many adjectives and adverbs and long, flowery sentences. Partly for this reason, it is at 429 pages at least 100 pages too long, if not more.

But that is not the only reason. The narrator/protagonist, Rob Ryan, spends an interminable amount of time ruminating on himself in an increasingly narcissistic fashion. These self-therapy sessions are too long and repetitive.

It is venturesome for a woman to write a first-person male character, and this male detective has noticeably feminine sensibilities. The result is to make this a chick-lit version of the hard-boiled detective novel, explaining why it is so popular with book clubs and why it came with such an enthusiastic recommendation from a woman friend. Just as a woman character written by a man is most often a fantasy version of how a man pictures what goes on in a woman's mind, this is something of a fantasy about how the male mind works. Ryan's thoughts and preoccupations simply do not ring true, nor do his reactions to developments in his relationship with his detective partner, Cassie Maddox.

That is just the prerequisite for a more serious criticism. A mirror image of this book -- one written by a man with a woman protagonist portrayed in the way French handles her male character -- would be attacked as misogynist. The men in this book are either super saps or simpletons and the reader ends up having very little sympathy for any of them. Ryan is the sappiest, but he's not the only one, while fellow detective Sam O'Neill is a simpleton. The women characters, as a rule, are much better drawn and more convincing.

French's literary ambition trumps her skill as a mystery writer because the plot is ultimately unsatisfying. The actual solution is fairly obvious from the beginning and most of the book is devoted to a red herring the size of a whale -- which is not the role of red herrings in a mystery. The whole premise of the book -- that Ryan and Maddox randomly catch a case that has such reverberations with his past -- is far-fetched and their approach to the case requires too much suspension of disbelief.

The Irish setting is interesting and the procedural details are mostly convincing. One jarring note for an American reader is French's Irish preoccupation with smoking. The characters live in the era of mobile phones but enjoy their smokes as though there was never any evidence that cigarettes cause cancer. It might well be realistic but it can be as off-putting for an American reader as someone lighting up in the living room.

Posted by Darrell Delamaide at 8:28 AM