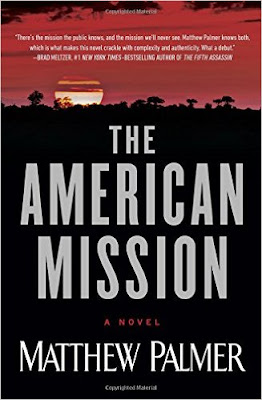 One of the things that makes thrillers tick for me is a sense of place, and that is one of the strongest aspects of Matthew Palmer's novel set in the Congo. Who would not feel a frisson when one of the characters says the location of a village in eastern Congo is exactly where Conrad's Heart of Darkness takes place.

Though hardly plumbing the same psychological depths as Conrad's masterpiece, The American Mission is a darkly cynical view of African corruption, corporate criminality, and American neo-imperialism by a writer identified as a former Foreign Service Officer.

There are predictable twists and turns as FSO Alex Baines teams up with a paragon of African beauty and skills who improbably becomes the chief of her tribe as she tries to save their jungle home from the predations of an international mining company. There is the "terrorist" leader who turns out to be a freedom fighter, the diplomat mentor who turns out to be part of a right-wing conspiracy within the State Department, and the CIA station chief who appears to be a model of integrity.

But the action and descriptions carry the reader along as the village and its tribe ring true in a language that is effective if not exactly eloquent. The book might have been somewhat shorter as the action lags in places, but all in all it's a quick romp. Already have his next book, Secrets of State, loaded onto my Kindle.
Posted by Darrell Delamaide at 9:44 AM