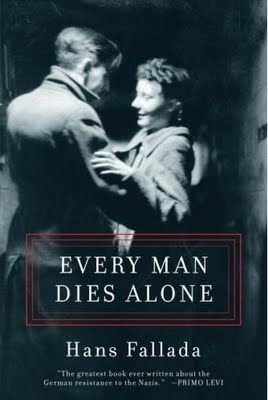 Hans Fallada can take you from wry irony to terror to a heartbreaking poignancy in the space of a few pages. From the opening chapter's Eva Kluge and her effort to keep her layabout husband out of her apartment to the Gestapo appearing one moment as a the Keystone cops and the next as the loathsome evil they were, the reader is carried along a roller coaster of emotions in this novel about German resistance during the war.

For Fallada, there are good people, and there are bad people. The good people make mistakes and even the bad people are human. But they are bad, irremediably bad. What makes for a good person? At some level, there is integrity, a line that cannot be crossed. Anna Quangel and Trudel Baumann, both good people, crumple under Gestapo torture or are betrayed by their own cowardice, but at some point there is within them a moment when they stand up to the terror. Integrity requires courage, and sooner or later, good people are called upon to display that courage.

Otto Quangel, foreman at a furniture factory that is now making coffins to bury dead troops, breaks with his former disengagement with the world and embarks on the quixotic mission of dropping treasonous postcards in various Berlin buildings. He dreams of his fellow citizens passing these missives furtively among each other, encouraged by this act of resistance to stand fast themselves against the oppressive Nazi regime.

But in fact all but a handful of the postcards are turned into the police by those who find them. These terrorized individuals don't even dare finish reading the cards but turn them in as quickly as possible. Instead of sowing resistance throughout the capital, Quangel is only keeping one Gestapo inspector busy pushing pins into a map of Berlin as each new card narrows his search for his quarry.

When Quangel sees the apparent futility of his resistance, he simply resigns himself to his fate. His fall ensnares all who are close to him, so that his act is beyond futile -- it is fatal for him and those in his life.

But it is a martyrdom that is still better for all concerned than subjection to an evil regime. This is Fallada's message and his condemnation of the German people who failed to resist. They are for him like Enno Kluge -- the cowardly, pathetic shirker who falls victim to the Nazis without ever understanding what happened to him.

Fallada succeeds in creating a novel of ideas without introducing a concept. His characters are everyday people from wartime Berlin, whose motivations are not articulated but speak loudly through their actions. The good people inspire by their hesitant courage, and leave the reader wondering what he or she would do in their place.
Posted by Darrell Delamaide at 12:07 PM