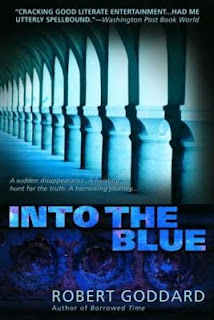 It's hard to pin down what I like about Robert Goddard. I picked up Into the Blue as a used book or remainder some years ago, and got around to reading it last year. It's not great literature, but the setting in Greece was appealing, the plot was reasonably intriguing, and the prose was clean and efficient, and sometimes bordering on lyrical.

It was probably the protagonist, Harry Barnett, that kept me reading, though. He is a down-to-earth character, almost a man without qualities, who has lost his way. And he doesn't really find it the course of the novel. But if he is shut down emotionally as the novel begins, he has revived by the time it ends.

This same character, then, appears in Into the Sun, which I read last month on the flight to France. Yes, just sat and read it for five or six hours until I finished it. No Greece this time, and a plot that veered into science fiction. But Harry Barnett kept us on the ground. There was too much coincidence in resolving Harry's dilemma, when he conveniently runs into an old acquaintance to get him out of trouble in Washington. But again, that lean, efficient prose carries you along and Harry's humanity gives you plenty to relate to.

There is something about the language of British writers that is a little grittier than the English Americans use. Rennie Airth is another little known British writer who has a fabulously organic style, an earthy prose the must reach deep into Anglo-Saxon roots.

Airth had an earlier career of writing novels that are all out of print. He has started writing again with a detective who was scarred by World War I solving mysteries in semi-rural England of the 1920s. But these are not your standard English cozies. River of Darkness and Blood-Dimmed Tide are brooding, sometimes brutal, mysteries that explore the darkness of the human spirit, starting with that of the protagonist, John Madden. (Somewhat serendipitously, when I went to check the titles on Amazon, I found that a third John Madden book, The Dead of Winter, was just published July 23, so I ordered it.)

Contrast the muscular prose of a Renee Airth, or even the more workmanlike but still able-bodied language of a Robert Goddard, with that of Alan Furst, an American writer who enjoyed his initial success in England before he became a favorite of the literati here in the U.S.

I started out as a big admirer of Furst, and considered him a role model for my own writing with his atmospheric suspense tales set in Europe between the wars or in the early years of World War II. Furst bravely defied the conventional wisdom that American audiences require an American hero or at least an American setting by featuring European -- continental European, not even British -- protagonists in a purely European setting. He has of course paid the price. While he now has a following in the U.S., he is not likely to break into the bestseller list.

Furst writes in an elegant, elliptical style. He watches old movies from the 30s to glean his sense of atmosphere and translates that brilliantly into prose. His characters are chilly men of the world -- I don't think I've seen a convincing female character in his work -- who arouse little sympathy in the reader. As his novels, each with a title more vague than the last, continued to come out with daunting regularity, I lost my enthusiasm for Furst. Unless you are willing to play his game and cast a youthful Jean Gabin as the protagonist, his books tend to be a little dull.

So I've read The Polish Officer, Kingdom of Shadows, The World at Night, Dark Voyage, and perhaps a couple of others -- I honestly don't remember. I started Foreign Correspondent and Blood of Victory but abandoned both out of boredom. I will probably give them another chance when I'm in a more forgiving mood. The protagonists become indistinguishable from one another and the shadowy plots turn into a big question mark: Who cares?

So I have a couple more Goddard novels on the shelf to read in due course. And I will have the new Rennie Airth by Tuesday. I may break down and get Furst's Spies of Warsaw now that it is in paperback. But I know from experience that if I pick up a Goddard or an Airth I truly will have trouble putting it down, whereas, as the wag quipped, if I put down a Furst novel I have trouble picking it up again.
Posted by Darrell Delamaide at 3:30 PM