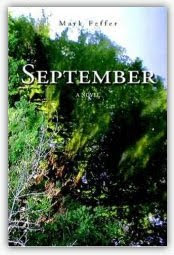 I met Mark Feffer through a mutual friend when I was living in Princeton. He kindly invited me to take part in a panel discussion in Trenton after I'd moved to DC.

His book, September, is a post-apocalyptic tale of a handful of survivors from a deadly virus in and around the Trenton, Lambertville area. It is a much gentler narrative than Cormac McCarthy's The Road or all the Mad Max stories of road savages.

It is an interior monologue of the protagonist, Rand Gardner, in the form of a journal. The disappearance of civilization as we know it alters his life only on the outside. Inside, where we spend most of our time, he has the same issues, insecurities and quiet accomplishments he has always had.

Mark's writing is smooth, non-intrusive. I found myself drawn inexorably along with Rand's musings. There is a dramatic confrontation as a climax, but no horror as in so many other books in this genre. I enjoyed reading this book and recommend it.

In the absence of electricity, the characters in September are reduced to a pre-industrial lifestyle, going back really not that far, to, say the early nineteenth century. They build fires, boil water, and, realizing that canned goods won't last forever, re-learn the arts of fishing and gardening.

All the buildings and roads of ex-urban culture are intact, but the physical geography of the Trenton area re-emerges as the characters ski in the winter and bike in the summer to visit each other. Seasons are magnified in importance with the disappearance of much that protects us from weather.

A gentle irony permeates the book. One family has decided to settle in a mall, so that all the legacy products of a vanished civilization -- bedding, tableware, sporting equipment -- are readily available. Rand rebuilds an old-fashioned mechanical typewriter and bikes to the next town in search of ribbons for it.

The focus of the book, though, is the caution that characterizes interaction between the survivors. For the most part, they live alone, separated by miles, meeting only occasionally. The post-apocalyptic setting allows the author to show the distances between people in a physical manner. The reader quickly grasps, though, that these distances are the same in our own civilized world, only masked by the convenience of our lifestyle.
Posted by Darrell Delamaide at 6:22 PM