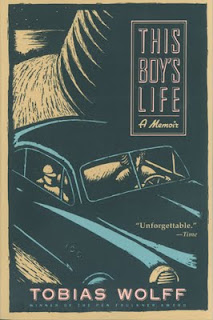 I like Tobias Wolff's writing. It's lucid, lean and pulls you along. His descriptions are so deft and his observations so acute that he startles you virtually on every page. I'm grateful to Peter Koenig for the tip to read Wolff.

I read Old School when Peter first mentioned Wolff a couple of years ago, and liked it. This Boy's Life was even easier for me to relate to because I had an odyssey of sorts with my mother after my father deserted us. How poignant the way the narrator sums up their lives toward the end of the book: "We were ourselves again -- scheming, restless and poised for flight."

I say narrator because even though this is branded as a memoir and Old School is a novel, both are autobiographical and actually can be read as a sequence. It is a convention to allow memoirists to render conversations from 40 years ago in quotes as if they were reporting a verbatim dialogue, when of course it is invented on the basis of what may be a very flawed memory. So I consider this memoir to be as much a fictional narrative as Old School, or, to put it the other way around, what's compelling about both books is the universal experience that transcends the characters and makes it irrelevant whether it is Tobias "Jack" Wolff or the unnamed narrator of Old School.

Having said that, I have a problem with the narrator in both cases. The person portrays himself as fundamentally dishonest -- a liar and a cheat. We are apparently supposed to accept this and find it sympathetic because at some level at some point in our lives we are all dishonest -- with ourselves or with the world around us. The process of self-discovery seems to be to realize that dishonesty in ourselves and to stop the evasiveness.

In Old School, the narrator is caught and punished for his dishonesty. So, eventually, is the narrator in This Boy's Life. However, in the latter case, the punishment is by way of a postscript. We are told about his problems at the Hill School, not shown.

We are led to believe in This Boy's Life that evasiveness is a form of survival, that his dishonesty is a form of affirmative action to make up for his disadvantages. It's the reasoning that gives us a Jason Blair -- the end justifies the means.

And the narrator's childish dishonesty -- don't all children lie and cheat is part of the message -- is less grievous than the mature dishonesty of those adults in his life, whether those who oppress him, like his stepfather, or those who help him, like the Hill alumnus who gets him into the prep school.

In any case, I'm ambivalent about this narrator. The punishment in This Boy's Life does not introduce a note of morality, only a certain inexorability. But maybe I'm missing something.

I bought a collection of Wolff's short stories, A Night in Question. I'm not a big fan of short stories, but I wonder if Wolff's gifts aren't best suited to this genre. And perhaps I will be freed of this unsympathetic narrator.
Posted by Darrell Delamaide at 12:10 PM