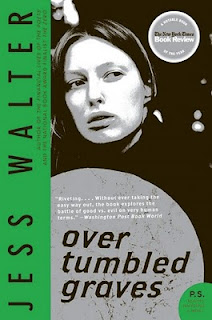 Jess Walter's first novel is a literary police procedural based apparently on a true story in his hometown of Spokane. The powerful prose, the delicious irony that characterizes his later work are present in this debut.

When detective Caroline Mabry, the protagonist, talks about her unsuccessful attempts at dating: "On their first date, they talked about leaving Spokane; she was waiting to hear from law school, he from an Alaskan fishing boat. That conversation had taken place on almost every date Caroline had in Spokane. Everyone was either in the process of leaving or apologizing for not leaving yet. Caroline found herself hoping it was the same in other mid-sized cities, that there were some places that could only be left, cities just barely boldfaced on road maps -- Dayton, Des Moines, and Decatur; Springfield, Stockton, and any city with 'Fort' in its name -- places that spark none of that romantic quality that young people believe will keep them from growing old."

When another detective, Alan Dupree, Caroline's mentor and would-be lover goes to a neighborhood on a call: "Dupree got off at the second exit and wound his way into a familiar neighborhood; they were all familiar if you'd been on the job anytime at all. He'd imagined starting a guided tour with retired cops, with starred maps of murder, theft, and perversion. His own map was no different from any other cop's: a rape in that house, a two-car fatal accident in front of that convenience store, a house where a biker had fenced stolen auto parts."

Mabry and Dupree are tracking a serial killer and the case, the conflict it brings, shatters both their careers. There are plot twists and surprises, but much more texture, more depth than you usually get in a procedural. Rich, literary characterization that makes you sympathize with the character's flaws more than their virtues.

Plus, Walter has his fun mocking FBI profiling and profilers, with the killer himself joining in the fun. But Walter also asks some serious and probing questions about murderers and tracking them down.

I like mysteries and and I really like Jess Walter, so this was a good book for me.
Posted by Darrell Delamaide at 10:37 AM