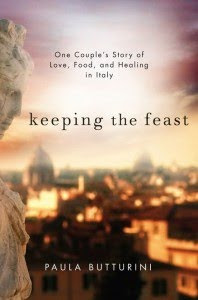 Read this book! It is a book about family and depression, food and friendship that is touching and searing and often just very moving. I've known Paula Butturini and her husband, John Tagliabue, for nearly 20 years, but Paula's account of John's depression and how they coped with it is so intimate and direct that these lovely personalities will come across to anyone who reads this book.

Paula, as her friends know, has a warmth and strength of character that is evident on every page of this book. She draws on memories of meals and family from her Italian-American childhood in Connecticut to show, not tell, how the culture instilled in each of us as children forms the foundation of the adults we become. For Paula, food is the cultural icon that links her to that emotional foundation.

She and John share that Italian-American background and love of food. That and the spirit of adventure turned them both into journalists and expatriates (after many years in Rome, Warsaw and Berlin, they now live in Paris). They also share a family predisposition to depression. Paula's mother suffered severely from depression -- something she has a child was only vaguely aware of -- and committed suicide at the age of 73, when Paula was living in Berlin. John had a previous bout of depression when he embarked as a young man on a life as a Trappist monk, which turned out to be not well-suited to his temperament.

The main narrative of the story concerns John's later depression after he was shot covering the 1989 Romanian revolution for the New York Times. That experience, life-threatening as it was, set the scene for a delayed post-traumatic stress syndrome that pushed John into severe depression two years later. Paula herself was badly beaten covering the so-called Velvet Revolution in Prague, and these two battered souls returned to Italy and Rome, where they had met and married, to deal with this crisis.

Paula opens her account with her daily trips to the market at Campo del Fiori, which supplied the ingredients for the three daily meals that knitted their shattered psyches back together. Or helped, at least, because it was a long healing process that involved time, therapy, the support of family and friends -- and John's employer, the Times -- and, as Paula shows, grace.

All of this is told in the simple, direct language that only a practiced writer can command. The slim volume benefits from an engaged editor who helped Paula ruthlessly strip the narrative to its essentials. But it is not bare bones. It is a rich, enveloping story of love and love of life that will inspire anyone who has feelings.

Paula describes the support of friends throughout the book, particularly some special friends who hosted them at their country home outside Rome. Others go unnamed or are only glimpsed -- such as John and Paula's good friend Lou, whose own sad fate would require another book.

But friendship is a two-way street and these friends not only provided support but benefited as well from the warmth, the grace, the humor, the intelligence, and, in the good times, the plain good fun of these two lovely people. All those qualities come across in this wonderful memoir, to reward all those who pick up this book and read it.
Posted by Darrell Delamaide at 5:53 AM