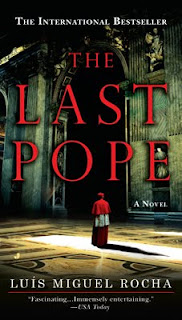 This is a funny mishmash of a book -- a thriller that doesn't thrill but keeps you turning the pages anyway. The barest bones of a fictional plot knit together a jumble of notions about how John Paul I was murdered. That real-life drama is sufficient to keep you reading, even though there was virtually nothing new in this for me.

The plot of lost documents and a villainous CIA collaborating with dark leftovers of P2 is, to put it mildly, preposterous. The characterizations are bland and hardly one-dimensional, the "action" consists of a couple of hackneyed chase scenes and some mild violence (the author, Luis Miguel Rocha, is identified as a sometime scriptwriter).

The warmed-over conspiracy theories about Albino Luciani and his 33 days as pope are nonetheless intriguing. Much as the realization that Kennedy's assassination wasn't the work of a lone gunman, the truth about the assassination of John Paul I -- and I have no trouble accepting this as fact at this point -- is leaking out through repetition and fiction and will almost certainly not be verified by any authority in our lifetime and probably never. Yet, to see Sindona, Calvi, Marcinkus, Gelli and the others all make their appearances again brought back this time for me. Because Rocha is Portuguese, he also throws in the third secret of Fatima as foretelling Luciani's death.

I had abandoned Raymond Khoury's book, The Sanctuary, because it was so plodding and dull. The Last Templar was not easy to finish, but Sanctuary just seemed like a pure waste of time. So how do all these poorly written, dull "thrillers" get into print? Are editors, and readers, so under the spell of Da Vinci Code that anything smacking of the occult or the church, especially if there's a lost document or code or insignia is fair game? Sadly, the answer is almost certainly yes.

I'm going to get back to a well-written thriller and tackle Night Soldiers, an early Alan Furst that I somehow missed, and try to find something with some real meat on the bones.
Posted by Darrell Delamaide at 3:00 PM