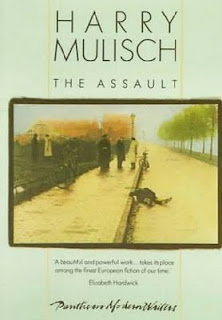 Now this is a powerful book. Harry Mulisch's tale of the assassination of a Nazi collaborator in wartime Holland and its effect on a 12-year-old whose family was executed in reprisal plumbs the depths of guilt and integrity in the face of adversity.

The Dutch author deftly sketches the incident and its aftermath in a translation so graceful you'd never guess it wasn't written originally in English. The evocation of sleepy Haarlem, the want and terror of the occupation, the frightening suddenness of the assault, the swiftness of the consequences -- all this sets the stage for the long denoument in the life of Anton Steenwijk.

As in a parable, Anton, who tries to put the horrible events of a single night into a forgotten past, is drawn into encounters that illuminate the full ambivalence of what actually happened -- with neighbors who witnessed his parents' execution, with the son of the collaborator who was assassinated, with the resistance fighter who took part in the assault, and finally with the neighbors who moved the body from in front of their house to Anton's house and unleashed the fury of the Nazis on his family.

He discovers the truth behind the mystery of the woman who provided succor to a traumatized boy on the night of the assault, transforming his life yet again. As the final piece of the puzzle falls into place, he realizes how right he was not to desire or seek revenge for the injustice that befell his family.

There are passages of limpid beauty and breathtaking insight in this compact book. As Anton pursues his medical career in postwar Holland, he feels a detachment from society as a result of this wartime trauma. He votes Social Democratic and then switches his affiliation to a party that claims there is no difference between left and right. "Still, national politics meant little to him: about as much as paper airplanes would mean to the survivor of a plane crash."

But he is not allowed to maintain this detachment. Anton is forced through the author's artifice to face his past in all its ambiguity and to come to terms with it if he is to have any chance at happiness. All of us, of course, though in much less dramatic fashion, face this same challenge.
Posted by Darrell Delamaide at 3:13 PM