Silence of the Grave 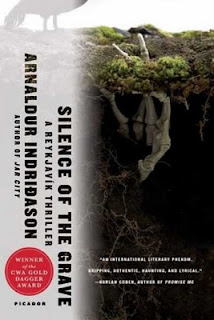 Channel surfing one evening I came upon the Icelandic film Jar City and was intrigued by the stark landscape and Nordic chill of what I learned was a film based on a novel by Arnaldur Indridason. This book continues the series.

As is the case with Wallander and other Nordic detectives, Indridason's Inspector Erlendur is a flawed, unhappy man who has a knack for solving crimes. The environment is bleak and intense, and in Iceland, there is a frontier element missing in the more prosperous Sweden, Denmark and Norway. It helped to have seen that landscape in Jar City -- hard to imagine how the American remake that is in production can match the Icelandic original.

What makes Silence of the Grave compelling as a novel, however, is not just atmosphere, but the deep-running psychology of a 60-year-old incident -- I hesitate to say crime -- that Erlendur tracks down when a skeleton is discovered on the outskirts of Reykjavik during construction of a new housing development. The portrayal of a wife-beating brute and the effect of his abuse on his family is intense and hard-hitting. The suspense is maintained by the painfully slow unearthing of the skeleton by an archeological team. After all, what hurry is there getting to the bottom of a death that clearly occurred decades ago.

I have the feeling it is not a great translation, but it's hard to know if a certain stylistic clumsiness is in the original or is due to the translator. The characters and atmosphere, the boldness of the plotting, more than compensate in any case, so the book is decidedly gritty.

The parallel development of Erlendur's character, his relationship with his daughter, the troubling secrets of his own past add another layer of psychological texture that makes the book very satisfying to read. Indridason takes a page out of Henning Mankell's book to make Erlendur's assistants mildly interesting in their own rights.

So Iceland is well represented in the new wave of Nordic crime writers. The harsh environment of these countries touching the Arctic Circle is anything but cozy, and strips society and the characters of the novel down to the essentials. It helps that the writers are not without talent and that we are now getting access to them in serviceable translations.
Posted by Darrell Delamaide at 2:20 PM