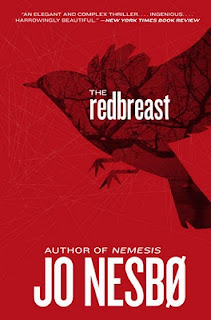 Jo Nesbo tries and largely succeeds in blurring the lines between crime fiction and literary fiction. There is murder and police and something like a procedural in The Redbreast, but this Norwegian writer is plumbing the depths of individual psyche and also political consciousness.

Most good crime fiction tries to do this, but some succeeds more than others. In a posting last year on Nordic crime fiction, I reported that I had gotten bogged down in Redbreast because the hero, Harry Hole, disappeared from the early pages as the author developed a back story set in 1944 on the Eastern Front.

So I started over in a more receptive frame of mind and let the back story play at its own rhythm. It is of course vital for understanding the action set in contemporary Oslo. It is something of a challenge to an English reader because the unusual Norwegian names, while not as bad as Russian, are difficult to hold onto. It is further complicated by the fact that characters have similar names, names similar to their birthplaces, nicknames, identity switches and, one begins to suspect, multiple personality disorders.

Nesbo lays out his plot in a leisurely but well-paced manner. Harry remains largely sympathetic, though he does rub you the wrong way sometimes. There are more murders, including a nasty philanderer who messed with the wrong woman at the wrong time and one victim whose murder is still left partly unsolved at the end of the novel -- a thread to be continued no doubt in the next installment in the series.

These Nordic crime novels do convey the curious charm of Scandinavia, these northern countries that are a fascinating blend of European culture and frontier ruggedness. Can spring feel so good without the rigors of a dark, cold winter? Oslo and Norway, more so than Stockholm and Sweden, carry those echoes of Vikings and Atlantic harshness.

Like Stieg Larsson in his Dragon Tattoo series set in Sweden, Nesbo is fascinated by Norway's Nazi past and neo-Nazi present. Dark undercurrents of fascism run through Norwegian society then, during the war, and now. Even Americans who know what Quisling means are probably unaware that he was a Norwegian official who headed the collaborationist government during the Nazi occupation of Norway. The Norwegian resistance, in Nesbo's portrayal, was a feeble movement that gained mythic proportions only after the Nazi defeat.

All of this creates a rich environment of conspiracy and political betrayal that lends impetus to the narrative in Redbreast. A full cast of well-drawn characters, not one but two love stories, a villain who is evil but still arouses a touch of sympathy, some nail-biting suspense, murder and gore -- it's all here in a well-written and well-translated 521-page package.

Having sampled and enjoyed detective stories from in Sweden, Norway and Iceland, I suppose I should look for some Danish and Finnish detectives. I'm betting publishers have looked for and found equally talented authors in these countries to produce crime fiction that by now, given how trendy Nordic is, has found its way into English. Watch this space.
Posted by Darrell Delamaide at 10:09 AM