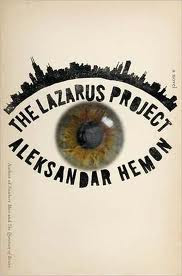 I feel ambivalent about this book by Aleksandar Hemon. The writing is dazzling, it is chockablock with insights, it is a compelling, layered novel -- and yet curiously unmoving.

The narrator, Vladimir Brik, who shares many biographical details with Hemon, is troubled, flawed, and ultimately, I think, not very sympathetic. While the wit and perception carry the reader along, Brik's ambivalence and what seems to be lack of character makes him someone it's hard to care for.

This may well be Hemon's intention. Brik, caught between cultures and a perennial victim like the historical Lazarus Averbruch that he wants to write about, suffers from being in this situation. He is precisely not the hero his American wife, Mary, might expect. He is rather the somewhat unsatisfying character you encounter in Bosnia or Moldova or Ukraine.

"I recalled Mary, her strained, half-assed Catholic innocence, her belief that people were evil due to errors in their upbringing and a shortage of love in their lives. She just could not comprehend evil, the way I could not comprehend the way the washing machine worked or the reason the universe expanded into infinity. For her, the prime mover of every action was a good intention, and evil occurred only if the good intention was inadvertently betrayed or forgotten. Humans could not be essentially evil, because they were always infused by God's infinite goodness and love. We had conducted long, unerotic discussions about all this."

That deadly American innocence, as R.W.B. Lewis wrote about in The American Adam and Herman Melville portrayed so well in Benito Cereno. The innocence that remained ignorant of evil -- the kind of evil Chicago authorities showed toward immigrants Lazarus and Olga Averbruch, no different than the vicious anti-Semitism that chased them out of their homeland.

Brik contrasts storytelling in Bosnia -- where listeners voluntarily suspended disbelief to enjoy a good story, expecting it to be embellished or fabricated -- with that in America. "It was different in America: the incessant perpetuation of collective fantasies makes people crave the truth and nothing but the truth -- reality is the fastest American commodity."

Obviously, Brik's relationship with his neurosurgeon wife is not in good shape and seems to have come completely unraveled by the end of the novel -- though it's hard to tell because Mary is more of a cipher than a person. Olga Averbruch, whose point of view is the primary one in the parallel narrative of the events in 1910 Chicago, and even her brother, the dead Lazarus, are more alive than Mary.

There are, as one blurb promises, traces of Ragtime and Everything Is Illuminated, but both narratives in this novel skim the surface and are not as satisfying as the total immersion of the two earlier works. The real focus is Brik's problem in finding a cultural identity, one that will enable him to fulfill the same yearning that Lazarus and Olga had, of finding happiness and peace after being uprooted.

Brik resists Mary's desire for him to become more acceptable by becoming more American. She accepts his foreignness as long as he is willing to grow out of it. So Brik seeks refuge in his alter ego Rora, the enigmatic Bosnian photographer who accompanies him on his "research" trip back to Europe. That trip slowly slips into a fantasy-land. It is impossible for the reader to consider Rora's fate as real, or, if it is supposed to be real, to care. But if we adopt the Bosnian attitude toward storytelling, it doesn't matter.

We will never know what really happened to Lazarus. It is a mystery without a solution and still tantalizing when the book ends. But we get a glimpse into a little-known episode in American history, when hysteria about "anarchism" and hyper-prejudice about Emma Goldman and other radicals suppressed civil rights in a way uncomfortably similar to today's anti-Islam hysteria. It would be helpful to know more about this period and hopefully Jamie Morris will be able to translate his project for a Goldman biography into reality.

Hemon is another recipient of a MacArthur Foundation genius grant, like Yiyun Li. This book is more cerebral than The Vagrants and for that reason less satisfying, but stimulating and worthwhile nonetheless.
Posted by Darrell Delamaide at 7:43 AM