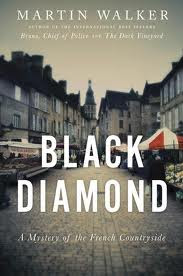 My review of this book by Martin Walker appeared today in Washington Independent Review of Books:

Martin Walker’s series chronicling the adventures of a village policeman in Périgord is Kool-Aid for Francophiles and a potion to convert remaining skeptics to the joie de vivre that infuses French life.

Black Diamond is the third murder mystery featuring Bruno Courrèges. Fortunately, the series managed to survive the odd-duck title of the debut novel, Bruno, Chief of Police. This new installment has all the elements that have attracted a large and growing following to the novels — an endearing hero who is not only a jack of all trades but also master of them, an idyllic village in southern France steeped in culinary tradition, and a host of quirky but lovable local characters.

Walker, a former journalist who now heads a think tank in Washington, D.C., does not spare the darker side of life in the French countryside — the erosion in lifestyle from drugs, immigration and other social problems that intrude on the idyll, as well as the darker undercurrents in France’s past, from collaboration with the Nazis to colonial warfare in Algeria and Indochina.

It is the colonial past that looms in the background of this plot. A former member of the French secret services who has retired to the fictional village of St. Denis is brutally tortured and murdered as he waits to join a hunting party with Bruno and other local dignitaries. Was the murder related to the victim’s past service in Algeria and Indochina, or was it rather a result of his involvement in exposing potential fraud in the local truffle market? (The “black diamond” of the title refers to the black truffles that Périgord is justly famous for.)

The plot is further thickened by apparently unprovoked attacks on Vietnamese vendors in the local market, which may be related to fire-bombings of Chinese restaurants elsewhere in France and herald an outbreak of gang warfare between these two sets of immigrants. Then there is the appearance of a golden-boy politician in the local chapter of the environmental party, the Green Party, who, coincidentally it seems, has his own opaque past in East Asia.

This environmental zealot, who becomes Bruno’s rival for the affections of an English expatriate with whom the police chief has an on-again, off-again affair, is estranged from his father, a local businessman who must close down his sawmill because it runs afoul of new environmental restrictions.

So there’s plenty to keep Bruno busy. Not that he has to solve these crimes alone. Walker is a master at portraying the overlay of jurisdictions in a France that some people might confuse with a police state. In addition to Bruno, the local constable in the employ of the mayor, there are the gendarmerie, the national force implanted throughout France, and the Police Nationale, France’s version of Scotland Yard, which directs important cases from Paris.

But Bruno must also find time to do some slow cooking the French way, scrimmage on the local rugby team, play Father Christmas at the children’s party, balance the appeals to his tender side as the town’s leading bachelor among the aforementioned English expatriate, an attractive martial arts expert from the Police Nationale and a single mother who is being sexually harassed at that suspicious truffle market where she works part time.

Nothing’s too much for Bruno, however, who manages to ruin two sets of clothes, getting soaked with blood from the murder victim and covered in slime when he rescues a child from a showcase manure pit in an environmental facility.

But Bruno, an orphan who fought with French troops in Bosnia, is a man on a mission. He must singlehandedly preserve the rural life that he cherishes. Walker describes Bruno’s musings about the various threads of his murder case as he looks upon one bucolic scene in St. Denis: “It was a peaceful, happy landscape. But there was a menace lurking on Bruno’s turf, a threat of violence and subtle terror against hardworking and law-abiding people that Bruno knew and liked. … Bruno knew it was his duty to defend the victims, to allay their fears and to bring the intimidators to justice.”

The reader wants that, too, as Walker skillfully immerses us in the conservative values of the French countryside that he appears to know so well. Bruno, we have learned in his earlier adventures and again in this novel, is far too good a lawman to be buried in this country village. His ambitious girlfriend, the Police Nationale agent he has worked with before, and her boss, want Bruno to join their team in Paris. But he’s fond of his quiet life in the country. His truffles are beginning to grow, his shepherd’s cottage becomes more comfortable each year and the hunting is good.

This third Bruno novel is a splendid introduction to the French country cozy that Walker has carved out as a new subset of the genre. It is on a par with the debut novel both in its depiction of French country life and its slow-paced suspense as a mystery. The intervening novel, Dark Vineyards, suffered from a plot that lacked any really evil villains and where the deaths were more accidental than dastardly murders.

Here the murders are plenty dastardly and the villains are not only evil, but downright nasty. There’s ambiguity, too, and it’s not always easy to figure out who are the good guys and who are the bad guys.

One thing for sure, though — Bruno is a good guy. Everyone needs a friend in southern France to go spend some time with, and Martin Walker has opened Bruno’s door to anyone who has a few hours to join him in the simple joys of la vie en rose.

Darrell Delamaide, author of the financial thriller Gold, lived in France for 11 years and returned to southern France this summer to read the advance copy of Black Diamond near the scene of the crime.

Posted by Darrell Delamaide at 6:17 AM