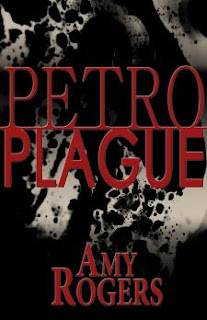 I’m always a sucker for disaster movies on TV – asteroids, global warming, earthquakes, you name it – so in my new exploration of e-books I readily took up Amy Rogers’ techno-thriller about bacteria that start eating up the world’s oil supply.

This plot device, based on extrapolation of the bacteria that are used to help clean up oil spills, is not completely original, I learn from Amazon, because a 2007 book – Ill Wind by Kevin J. Anderson and Doug Beason – has a similar premise for its point of departure.

But it all depends on execution, and Rogers does a pretty good job of focusing this potentially global disaster in a dramatic action starring a Latina graduate student at UCLA and restricting the initial disaster to Los Angeles. Motor-driven LA is, of course, the perfect place to feature a gasoline-eating bug and the picture of a city paralyzed and quarantined by the disappearance of all petroleum products is captivating.

Los Angeles is also an excellent choice because of its geographic isolation – a fact few of us non-West Coasters are even aware of. The author uses the mountains ringing LA to great effect as a way of trying to contain the disaster and as a challenge for the heroes trying to provide the silver bullet to end the disaster scenario.

Christina Gonzalez is the grad student who is working with the “mad” scientist character Dr. Chen to tinker with these bacteria so they can be used to convert the hydrocarbons in hard-to-get oil sands into methane – natural gas – that is much easier to recover and kinder to the environment. It is a two-step process, and unfortunately for the planet’s outlook, only the bugs performing the first step – converting petroleum to hydrogen and acetic acid – are the ones who get loose.

Rogers draws Christina as a full and sympathetic character. And her two sidekicks, cousin River and her boyfriend Mickey, also grow into reasonably well-developed characters, with flaws and virtues in equal measure. A good editor would have trimmed the early interaction of these characters, which take on an amateurish quality, to get to the faster-paced action more quickly.

There is also a certain amount of wit in the writing, which, along with the generally good quality of the narrative, keeps the reader turning the pages. The evil corporate guy is a thin villain, and the LA mayor, a Latino who conveniently for the plot served as a helicopter pilot in Iraq, also needed some more fleshing out for the role the author had in mind for him.

Judging by the editorial and reader reviews of Ill Wind, Rogers’ treatment of this disaster scenario, in what is essentially a self-published book, compares favorably to the earlier book, which has the benefit of being “curated” by the very hot editors at Tor.

Techno-thrillers, as Michael Crichton demonstrated so well, are a great niche, so I’m sure Amy Rogers will be out soon with another book. And, who knows, maybe late some night Petroplague will appear as a disaster movie on TV.
Posted by Darrell Delamaide at 8:59 AM