The Voyage of the Narwhal 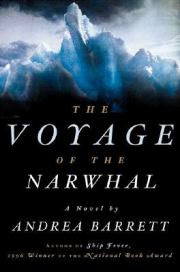 Andrea Barrett's novel about the era of discovery and exploration in the Arctic is intoxicating. Especially for me after a diet of mysteries and thrillers that are often entertaining but rarely memorable, reading truly literary fiction by a master is like breathing pure oxygen.

What makes it "literary" is the combination of prose that is exquisite and robust at the same time; characters that are subtle and nuanced; and a riveting plot with emotional undercurrents that address basic human desires. Barrett puts this all in a package that is also seamlessly entertaining.

The main character is Erasmus Welles, a natural historian who in modern parlance would be called a loser. He picks the wrong expeditions to accompany, the ones deemed largely to be a failure and which are forgotten or remembered only with embarrassment. He is too self-effacing and honest in an age and profession where the self-aggrandizing egomaniacs willing to stretch the truth and even lie -- like the historical Kane or Erasmus's fictional nemesis Zeke -- are the ones who get the recognition and the glory.

The novel tells the tale of one of the many expeditions in the mid-19th century that set out to find the famous explorer Franklin, who was lost with his crew in the Arctic. It is Erasmus's childhood friend Zeke Vorhees who has raised the finance and planned the voyage who asks him to accompany the expedition as natural historian, collecting samples and documenting their trip into little-known Arctic waters.

The trick of Arctic exploration was to use the short window of late summer when ice packs had thawed enough to allow ships to pass and to find your way back before the onset of winter closed off all escape and forced an ice-packed crew to spend the long winter in the Arctic. The fact that Zeke wanted to be provisioned for the eventuality of spending the winter, Erasmus realized too late, indicated that he was willing to take that chance if it was necessary to fulfilling his ambition of either finding Franklin or exploring previously uncharted waters.

For these voyages were primarily about ambition. Barrett is a master at portraying the passion that motivated  these 19th-century scientists, discovering and cataloging nature in all its aspects, as she displayed in the collection of novellas in Servants of the Map. This was Erasmus's main motivation. He grew up in a Philadelphia household where his father -- much like Indiana Jones' father as portrayed by Sean Connery -- was obsessed with arcane learning and indoctrinated his children -- especially the four sons Erasmus, Linnaeus, Humboldt and Copernicus -- in his love of learning and discovery.

But Erasmus is not immune to the ambition of getting the recognition and glory -- and indeed, money -- that accrued to these explorers who enthralled the public with their books and lectures after they returned. These adventurers, for all their self-aggrandizing faults, received the adulation then that we now give to celebrities with far less achievement. His earlier voyage to the Antarctic was a failure and he sees a chance to redeem his reputation in this new voyage.

The ship, the Narwhal, is named after the peculiar whales of the Arctic waters that have a single long horn protruding from their heads. It sets out with considerable fanfare from Philadelphia with Zeke as commander, Erasmus as natural historian and his second, a whaling captain as "sailing master," a surgeon, a cook, a carpenter and a small crew.

During the voyage to these exotic outposts in Greenland and northern Canada, the story is about the tension between Zeke and his crew, with Erasmus caught in the middle. Erasmus is drawn to the surgeon, Dr. Boerhaave, himself an amateur natural historian, and the young Irish immigrant cook, Ned Lynd, who apparently was a minor character in Barrett's earlier Ship Fever, which won a National Book Award. In harrowing detail, drawing on numerous journals of real explorers from that period, Barrett depicts the hardships of the voyage and the privations and dangers that set in once they are immobilized for the long, dark winter.

Interlaced through it is Barrett's wonderfully exact descriptions of the minutiae of flora and fauna that so impassioned the natural historians who filled those fusty museums with all those glass cases of bones and shells and produced all those engravings in lovingly crafted books. The reader learns to relish the very obscurity of the places and things described by the author.

But the end of the voyage and the return of the travelers is not the end of the story. It is in fact the aftermath of the voyage as it plays out again in Philadelphia where the themes of ambition and failure and betrayal so tellingly introduced in the harsh Arctic landscape come to fruition in an urban setting different than ours but easily recognizable.

Erasmus's sister, Lavinia, who was betrothed to Zeke, waits like Penelope for the return of her beloved. Another childhood friend of the Welles, Alexandra, whose family has fallen on hard times, stays with her as a paid companion. The artistically inclined Alexandra gets involved in producing the engravings for the book of an earlier Arctic explorer, the real-life Kane.

When the remnant of the Narwhal crew returns (given the hardship of the voyage it is not a spoiler to reveal that not every one makes it back), it is their interaction with the two women and Erasmus's brother Copernicus, a painter of some renown, that makes for a long second act.

A subtext to the human drama is the depiction of how these explorers, for all their human failings, enriched our understanding of the world. While the whalers who rescued the Narwhal crew derided city dandies like Zeke and Erasmus who made a big deal of "discovering" and naming places they were long familiar with, bringing back the knowledge was in fact an important contribution. No matter that some of these men were virtual charlatans in exaggerating or dissembling their discoveries, in glossing over their cruelties and errors. Their reports, their sketches, their specimens were nonetheless a vitally important contribution to the advancement of scientific understanding.

I went through my science phase as a child and can easily relate to the fascination of Erasmus for discovering and collecting things. It is in fact the childlike enthusiasm of these early explorers that provides much of the energy of Barrett's historical fiction.

But whether you share this enthusiasm or not, the harsh human lessons of Barrett's drama have a universal appeal that will reward any reader. The thrill of Arctic exploration, the discovery of new and unexpected places, the time travel to the Philadelphia and Washington of a young and energetic America -- all these are bonuses just to be enjoyed. I was a big fan of Barrett after Servants of the Map, and now I'm a devoted fan.
Posted by Darrell Delamaide at 7:17 AM