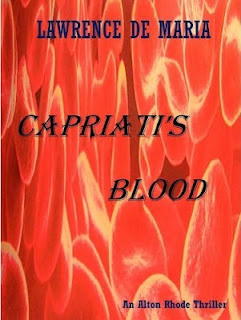 Lawrence De Maria's crackling suspense yarn keeps the reader in thrall as first-person narrator Alton Rhode -- a cop turned soldier turned PI -- tries to hunt down a missing father whose daughter needs a bone marrow transplant to beat leukemia. Billy Capriati is the father and Rhode, just returned from combat and needing a client for his new PI business on Staten Island, takes on the case from the seductive Ellen James, a model and sometime actress devoted to her ailing 14-year-old daughter.

There's not much to go on, and as Rhode tries to track down the missing Capriati based on the few traces from his childhood and college days in Staten Island, he finds himself getting some unwanted attention from local Russian and Italian mobsters, who seem to have something to do with the sudden disappearance of Capriati shortly after the affair that left Ellen James with a daughter.

Both the narration and the dialogue are alive with wit and energy as De Maria, a longtime reporter for the New York Times, keeps the pace going through this relatively short (218 pages) thriller. Rhode is a sympathetic character possessed of a reckless integrity that makes him a soft touch for a part-time thug who is tailing him and a less sympathetic conspirator who dupes him. He takes romance where he can find it, falling not only for his client but for a swimming instructor/philosophy teacher at the college where he begins his search for Capriati.

De Maria renders the quirky charm of New York's forgotten borough with the affection of a native and also offers another convincing portrayal of Florida, the primary setting for his earlier Sound of Blood mystery, as Rhode closes in on his quarry. Telling details and vivid descriptions make both settings come alive.

There are numerous twists in the plot, some more convincing than others, but once you're along for the ride it's a simple matter to suspend disbelief as called upon. The plot needed perhaps one more layer or clever twist to qualify as a full-fledged novel, but in the age of e-books we no longer have to worry about length or complexity as long as the author, as he does in this case, serves up a completely satisfying read.

Posted by Darrell Delamaide at 11:57 AM