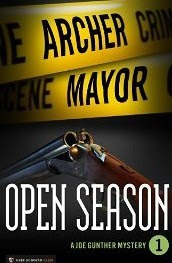 Archer Mayor's police procedural featuring Joe Gunther has a lot going for it, so it took me a while to figure out why it was taking me so long to read it.

Here's what it has: A good, original plot, with some odd twists and turns; a wonderful sense of place in Brattleboro, Vermont; a sympathetic, well-drawn protagonist who narrates in first person with a distinctive voice; a great climax that really does, finally, keep you turning the pages.

After some reflection, I could put my finger on a couple of things that slow the book down. One is that the dialogue is at best prosaic and at worst wooden. There is no wit. The characters plod through their dull lines.

The other thing is that there are too many characters who don't contribute to the plot or add anything else meaningful to the reader. Gunther's love interest, Gail, is hardly even one-dimensional, intermittently there, and often inexplicably absent. The police chief, Brandt, is just plain annoying, fussing around with a pipe (who does that? why bother?) and in general contributing nothing to the novel except distracting the reader and slowing down the pace. A troubled colleague, Kunkle, likewise is really just a distraction, adding nothing of any significance to the plot and not really helping us understand Gunther.

Gunther's close friend and mentor, Frank, is a bit more interesting, but ultimately the reader understands too little of his motives and sees too little of him to feel anything like sympathy, let alone caring for him. Oddly, Gunther's nemesis as he is forced to reopen a three-year murder case -- known as Ski Mask because that's what he wears as he makes it clear to the police they jailed the wrong person -- emerges as a quirky character that in some way both Gunther and the reader actually do care about.

For me, the pluses outweigh the minuses and I can give the book 4 stars, keeping in mind the subjective nature of these ratings. I liked the book for the reasons listed and especially liked the climactic scenes in a driving New England snowstorm. However, having visited Vermont once with Joe Gunther, I couldn't say I'd hurry back for another adventure with him.
Posted by Darrell Delamaide at 10:15 AM