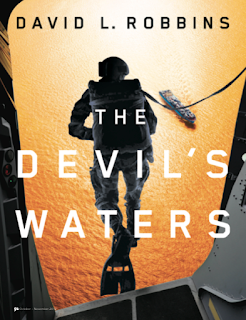 This thriller by David Robbins has a lot going for it. It involves the very topical Somali pirates and features a little-known crack military team, the U.S. Air Force Pararescue jumpers. The action is situated in Somalia, Djibouti and a French freighter in the Gulf of Aden, all suitably exotic.

Robbins is an accomplished writer and keeps the pace moving. His descriptions are crisp and his grasp of military operations and hardware is authoritative, so that the book has a solid feel to it. Interestingly, he alternates the point of view between the Somali pirates, led by Yusuf Raage and his cousin, and the American "PJs", led by LB DiNardo. Robbins gives Raage a surprising depth of characterization with a certain amount of sympathy for what drives the Somalis to piracy. The airmen are placed in some brutal situations, and even though they are hard-bitten, they don't remain unaffected.

Perhaps because Robbins has set the bar so high in this altogether compelling thriller, I found myself missing a little more depth in the American protagonists, and especially LB. What we see of his interior life is fairly flat and the banter among the PJ team doesn't really substitute for characterization that gives the reader any empathy. In fact, I found I had more sympathy for Yusuf and his clan than for the PJs. As a result, LB -- this "call signal" stands for Little Bastard -- lives up to his nickname, unfortunately for a reader who would like to identify more with the hero.

The callous cynicism behind a plot that involves a secret shipment of a super-weapon to Iran is just credible enough and there are other highlights -- such as the bitter and broken Russian captain of the freighter, Drozdov. The enigmatic Russian scientist, Irina, is less convincing. Her appearances are too intermittent and too much of her story is told rather than shown. And the tease of a potential relationship with LB helps neither plot nor characterization.

The action is good but the post-climactic denouement involves too much telling as a new character comes in to tie up the loose ends.

I came across this book because Robbins had a review in the Washington Independent Review of Books and his bio described him as a novelist living in Richmond. For the first time, I took advantage of my Amazon Prime privilege of "borrowing" an e-book. It turns out that these can only be read on Kindle devices, not apps -- I guess so that they are able to take it back -- which is not ideal for me, since my first-generation Kindle is not always convenient to read. (Authors, btw, do get a payment each time a book is borrowed.)
Posted by Darrell Delamaide at 9:08 AM