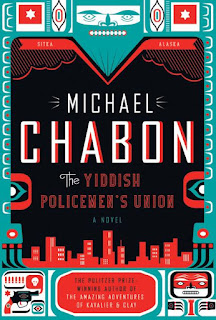 It's hard not to like Michael Chabon and to appreciate the rambunctious quality of his prose. After the dazzling The Amazing Adventures of Kavalier and Klay, he succeeds again in this book in creating a world that is coherent in itself while outside the bounds of normal experience.

The bestseller is famously about an alternate history of a Jewish homeland after the war, when the attempt to establish a Jewish refuge in Palestine fails. Instead, a sizable population is settled in Alaska, where, in a cross between an American Indian reservation and Hong Kong, they are leased a specific district in Sitka for 60 years. The action of the novel takes place in the weeks just before the Reversion -- the end of the lease -- when the district reverts to American control and most of the Jews must find a different home.

But this is much more than just an entertaining alternate history, clever as it is. This is a largely successful effort to capture in a story that is equal parts satire and thriller the entire sweep of Jewish history, from the irony of being the Chosen People to the undying hope for a Messiah.

The protagonist, Meyer Landsman (the first of many punny names, with Willie Dick being one of the most awful punned names since Pussy Galore), is a detective who, in the manner of all hard-boiled detectives, has gone to seed over a woman. When a junkie is murdered in his flophouse hotel, Landsmann sets out to find the killer even as the countdown begins for his jurisdiction to vanish. The search for the murderer, which he must eventually pursue after he has been suspended from the police force, leads him to discover a conspiratorial plot to change history and give Jews a new homeland.

Chabon's alternate history, like all good works in this genre, is not that different from real history. The Sitka district, with the Jewish population crowded into a tightly limited space, is a fanciful version of the ghettos in Warsaw and other cities prior to the war. The establishment of a post-Sitka territory is depicted as a heinous act of terrorism, sponsored by a certain Western government for blatantly cynical motives. In the view of many, of course, this description fits the establishment of the state of Israel.

Chabon luxuriates in the language and traditions of Central European Jews, punning in Yiddish, extrapolating and inventing from real traditions to create new arcane customs and foods. His language is prolix and florid, and at times tiring, but relentlessly imaginative and usually compelling. His descriptions are gritty and detailed, his images vivid, the overall atmosphere tellingly rendered.

There are many strands woven into the plot -- the theme of chess and why people are obsessed with it, the racial rivalries between Alaska's native Indians and "Americans" as well as with the transplanted Jewish population, the relations between fathers and sons and between husbands and wives, and ex-wives. All together, these plot lines create a rich texture for the reader while unraveling the mystery moves the plot along.

Fittingly, it all ends on an ambivalent note with the future very uncertain. Landsman seems to have found his footing again, and probably regained the love of his ex-wife, so it can all be seen as a redemption, but in the sense of being a vindication of the redeeming sort of life Landsman had always attempted to live.
Posted by Darrell Delamaide at 8:57 AM