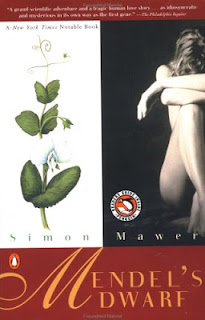 Simon Mawer's novel is almost Shakespearean in its scope, ranging from sly farce to a tragedy that takes on its own momentum. In this skillfully crafted and as always marvelously written story, he takes on big themes about determinism and identity and the role that choice does in fact play.

The narrator, Benedict Lambert, is a geneticist and great x 3-nephew of Gregor Mendel, the 19th-century Augustinian friar who founded the science of genetics. He is also a dwarf, the result of a small but fateful mutation in the DNA of his two normal parents. He is unhappy with his fate and makes it his mission to isolate the chromosome responsible for his condition. He tells people who condescendingly call him brave that he is not brave, because to be brave you must have a choice.

But of course he does have choices, and for the most part he makes good ones. The drama comes, however, from some bad choices he makes. In his willingness to tinker with genetic makeup, Lambert mirrors on a small scale (sorry for the pun, but it's the kind Ben makes all the time) the ethical quandary facing geneticists in our time -- where is the border between genetic screening and genetic manipulation?

The parallel narrative goes back in time to Mendel himself, and looks at how this priest, who was curiously lacking in the normal expressions of piety, patiently monitored his pea plants to formulate a theory of dominant and recessive genes that remains one of the most revolutionary scientific concepts in history. The depiction of Pater Gregor's devotion to his experiments is on a par with the passion for scientific discovery that Andrea Barrett portrays so well in her novels and short stories.

Like Barrett, Mawer immerses the reader authoritatively in arcane discussions of science, but these are woven so skillfully into the narrative that the reader is compelled to follow. Mawer is in fact a trained biologist and has taught the subject, so he is totally comfortable with the science and makes the reader feel the same way.

Ben's self-pity is never maudlin, but it is very real. It reminds us that even in a world where we admire film performances of an actor like Peter Dinklage, dwarfs in real life experience a type of rejection we can hardly comprehend. Mawer's portrayal is sensitive, never shying from silly or even crude observations, but avoiding any number of pitfalls. Ben remains a thoroughly sympathetic character even through a denouement that is intimated rather than actually shown.

Much as I liked The Glass Room, I think I might like this book even better. It is set primarily in London, with Mendel's life taking place in Brno, now in the Czech Republic. Mawer once again has an opportunity to feature the composer Leos Janacek and particularly his piano piece "On an Overgrown Path." The writing is terrific in both novels, but I think the seamless compression of so many layers of meaning is even more successful in this book.

Just a short sample of Mawer's art as Ben describes going to his new job at the Royal Institute for Genetics:


It is housed in one of those redbrick piles in Kensington that serve indifferently as museums, hospitals, Anglo-Catholic churches, or university colleges -- buildings reeking with that nineteenth-century neo-gothic conviction that almost everything has been done and proved, and anything missing is just around the corner and will be pretty straightforward when you come to it.

The Institute is strung out uneasily between the old and the new, between tradition and innovation, between the imperial past and the empirical present. On the one hand there is the old building with its ogive windows and gothic vaulting and statues of long-dead scientists in niches like sex maniacs skulking in the shadows; on the other hand, very much on the other hand, accessible through the kind of elevated plastic walkway that you find in airports, gleaming and humming like a machine, are the Gordon Hewison Laboratories, a cathedral of the new age where priests and scribes decipher and transcribe the texts, and find damnation written there just as clearly as they ever did in medieval times.

As a personal footnote, let me add that I was a bit distracted early in the novel by Mawer's references to Mendel as a friar and his garb as a soutane. After my years in the Jesuits, I feel like something of an expert on ecclesiastical nomenclature and dress. I had it in my head that Augustinians are, like Benedictines, a monastic order whose members are more properly referred to as monks. Finally, I went to Wikipedia and found out that Augustinians are indeed a mendicant order like the Franciscans and Dominicans and are properly called friars. In an article on St. Thomas Abbey in Brno, Wikipedia even address the anomaly of it being called an abbey and its head an abbot, though by rights it should be priory and prior. Still a mystery to me is the description of Mendel's dress as a soutane, when it should be a habit. But in fact the standard images of Mendel show him in what looks like a normal cassock with buttons rather than a habit with scapular and hood. At this point, however, I'm ready to concede that Mawer has done his research and has his reasons for describing things as he does.


Posted by Darrell Delamaide at 8:57 AM