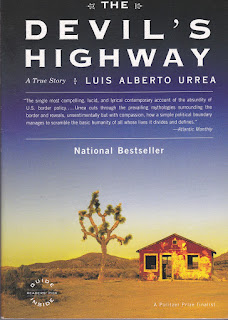 Novelist Luis Alberto Urrea, who writes in the magical realism tradition of Latin literature, has written a searing narrative nonfiction account of the deaths of 14 Mexican immigrants who got lost in the Arizona desert while trying to enter the U.S. illegally.

With his in-depth portrayal of the mixed motives and flawed characters on both sides of the border that led to this tragedy, Urrea brings the debate about immigration policy out of the clouds and down to some terribly sad facts on the ground. The victims, of course, are honest people seeking an escape from Mexico's grinding poverty to build a better life for their families. The official U.S. response of sealing off the border is shown as the hypocrisy it is because American businesses -- and families -- are always eager to exploit this low-wage work force.

Urrea tells his story in an episodic fashion following only a loose narrative in way more characteristic of a novel than a journalistic account. But his painstaking research into the official investigation and transcripts, his interviews with the 12 survivors from the group of 26 that originally set out to enter the U.S. through the desert known as the Devil's Highway, his first-hand descriptions of the locales involved from the departure point of Veracruz through the desert landscape to the hospitals in Tucson and Yuma where the survivors were nursed back to health, lends a painful authenticity to the tale. The reader cannot forget for a moment that this is not just a story -- it really happened and continues to happen every day.

The Migra -- the U.S. Border Patrol -- is the enemy in the eyes of the immigrants and the Coyotes who gouge them for outlandish fees to guide them across the border, but they are hardly the villain of the piece. While they are portrayed in all their macho glory, they are also shown to be genuinely concerned about the mortal dangers faced by those trying to cross the desert. One of the most telling details furnished by Urrea was that these hardened law enforcement officials paid for "rescue towers" out of their own pockets, beacons in the desert informing those "walkers" who were lost that they could not walk to safety from their present location and providing a panic button for them to summon a rescue from the Migra.

But the heart of the book is Urrea's unrelenting account of the brutal and painful fate that met the 14 people who died. The author describes in excruciatingly clinical detail the stages of sickness and death from hyperthermia and reconstructs how it must have played out for these individuals. While he sticks to documents for the words he puts in quotes, Urrea uses his novelist's sense of drama to get inside the heads of the victims with indirect discourse, conveying to the reader a sense of what these people were like and how they must have suffered.

I read this book because one of the volunteer staff at The Washington Independent Review of Books named it in a tweet as her favorite read in 2012. As the immigration debate comes in for long-overdue attention in Washington, this book can be a vital help in understanding the human tragedy of our misguided and ineffective policies.
Posted by Darrell Delamaide at 9:28 AM