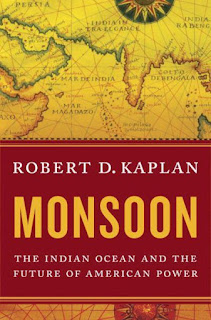 Robert Kaplan's geopolitical travelogue, subtitled "The Indian Ocean and the Future of American Power," was the first book selection of our Chevy Chase men's book group. While some members found it a bit of a slog, I found it riveting and it certainly generated a good discussion.

Kaplan portrays the Indian Ocean littoral on the basis of his first-hand encounters, lacing his analysis with history and interviews. The result is a gritty, authoritative look at the countries -- some, such as Oman, little known; others, such as India, quite familiar but seen here through a different strategic lens -- stretching from East Africa and the Persian Gulf to the South China Sea.

One of the revelations for me was that this ocean does not spill into the Pacific across a wide expanse, but is a fairly enclosed, self-contained body of water. Kaplan starts from the premise that most trade, and especially the vital transport of oil, goes by ship and so requires free passage through sea lanes. Oil from the Middle East on the way to China must pass through the Strait of Malacca, a geopolitical choke point whose significance is hard to exaggerate.

So the main narrative is China's effort to improve and maintain access to the Indian Ocean, which dictates a two-ocean strategy as the country flexes its growing economic power with acquisitions for its navy. It gives a focus to the rivalry between India and China and defines the continuing role for an American presence.

The author presents a series of vignettes -- Oman's enlightened despot showing how an authoritarian ruler can be as beneficial as democracy; the port of Gwadar in Pakistan illustrating China's use of its financial wealth to reinforce its geopolitical stature; the success of Guajarat's Hindu nationalist leader Modi in combating many of India's endemic ills; the corrupt dictatorships of Burma and Sri Lanka stifling development in these countries while giving an opening to China.

Kaplan is ambivalent about the benefits of democracy, at times optimistically praising its ability to help a nation like India rise out of poverty, but other times suggesting that it is ill-suited to some cultures and more of a hindrance to development. To me, he seemed overly optimistic about India's prospects and insufficiently pessimistic about the obstacles and challenged China faces in raising its billion-plus population to middle-class prosperity.

He provided the geographic connection to why China's rapid growth has boosted the economies of African nations. I knew the phenomena were linked because China is scouring the globe for natural resources and food, but I didn't realize that Chinese navigators historically used the monsoon winds to visit East Africa back in the middle ages. For that matter, I didn't even realize a monsoon is a system of winds sweeping across the India Ocean; I thought it was just a rainy season.

Kaplan's descriptions and analysis in this 2010 book are very much up to date and make it much easier to decipher reports in the newspaper. But his travels in Rangoon and Mandalay and Ceylon conjure up an exotic colonial world that makes want to pick up Somerset Maugham's Far Eastern Tales or George Orwell's Burmese Days to go back into time.

I enjoyed the book and it gave me a new appreciation of a region I've never been particularly interested in visiting. I'm still not in a hurry to see it first-hand but I'll have a better feel not only for the news coming out of there, but for the abundant fiction set in this world.
Posted by Darrell Delamaide at 2:41 PM