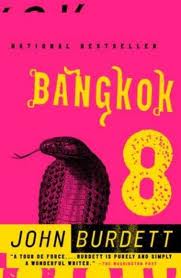 I'd bought this mystery by John Burdett a few years ago when I was exploring for new and different kinds of procedurals and picked it up now because Monsoon made me want to find out more about some of these Asian countries. Burdett rewarded me in spades. His smooth, entertaining, often very funny story makes you feel like you've been to Bangkok and seen it from the eyes of an insider. His engaging detective, Sonchai Jitpleecheep, is no doubt a Thai filtered through Western sensibilities but nonetheless his wry observations about Thai culture and philosophy, especially in contrast to Western notions, are humorous but also revelatory.

The story itself is fine, beginning with the dramatic and mysterious death of a U.S. Marine from the bites of dozens of cobras locked in his car with him. Why he was murdered, by whom and why in such a bizarre fashion is what Sonchai has to find out. The fact that his partner and soul brother was killed by one of the snakes when they went to the aid of the victim makes it also a mission of revenge for the Thai detective.

Burdett introduces a fascinating array of characters -- the murdered marine and his brother and girlfriend, the police colonel who gives new meaning to the word corruption, a number of Thai bit players, a truly evil villain, and not least Sonchai's mother, a retired "bar girl" turned entrepreneur who provides some of the most hilarious dialogue.

But it is the character of Sonchai, who narrates in first person, who most engages the reader. He is striving for the wisdom of Buddhism but he is also a young man sorting things out. His interactions with the various characters, his attempts to see the bigger meditative picture, his musings on reincarnation all add up to a quirky, original character who is unfailingly sympathetic. His observations on his mother's former profession and the Thai sex industry in general provide a good deal of insight into that culture. His praise for Thai cuisine, coming on top of a wonderful Thai dinner recently at our neighbors, prompted me to go out and get a Thai cookbook.

Less successful is the character of the FBI agent assigned to work with Sonchai on the murder of a U.S. soldier. Kimberly Jones is portrayed with a slight edge of misogyny that almost suggests Burdett has spent too long in Thailand, and her ambivalent relationship with Sonchai is so inconclusive as to be frustrating rather than adding any depth to the story or to the main character.

Sonchai's unraveling of the mystery has a number of surprising twists, but the author's ultimate resolution was neither convincing nor satisfying. Sonchai's belief in reincarnation was interesting as his belief but dabbling in some pseudo-hysterical reincarnation crosses the line into surrealism that doesn't really belong in a book as convincingly real as this one.

Burdett's writing is sharp and witty, his descriptions are telling, and his humor is on a par with that of Carl Hiaassen and Jess Walter. I see on Amazon that he has followed up this debut novel with several other Sonchai mysteries, so I just ordered the second in the series, Bangkok Tattoo. I doubt that I'll let it sit on the shelf several years as I did this one.
Posted by Darrell Delamaide at 10:36 AM