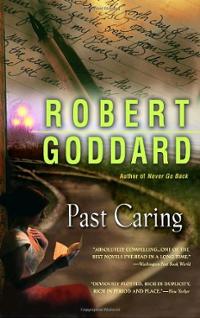 Some fans consider this one of Robert Goddard's best books and I certainly ripped through it. It has everything I like about the author -- a great feel for the language, a penchant for flawed characters and a narrative that moves at a measured pace but really moves.

This a complex work with a substantial story within a story as a young history graduate, Martin Radford, takes on a commission to research the mysterious fall of an Edwardian politician, Edwin Strafford. The action begins in Madeira but takes place mostly in Devon and London.

It is a slow start and when Goddard launches into the long section of Strafford's memoir, the story within a story, it is via one of my least favorite graphical devices -- endless pages of italic print. But the story became engrossing enough that I was able to ignore this. The memoir interested me particularly because it is set largely in the same time frame as The Grand Mirage, and like my book counts the young Winston Churchill as one of the characters in the political intrigue of the time (Goddard even delays Churchill becoming Home Secretary so that Strafford can occupy that position in the first half of 1910).

Because he refuses to play ball with Lloyd George's conspiracy to oust Asquith, Strafford falls victim to a nefarious plot to discredit him not only politically but in the eyes of his fiancee, Elizabeth Latimer, who somehow comes to believe that Strafford has a nasty secret that makes her break off the engagement. Strafford, in his memoir, remains ignorant of what that is supposed to be, and Radford's task is to find out just what it was for Leo Sellick, a wealthy South African who bought the villa in Madeira where Strafford spent a long exile and left his memoir.

Goddard provides sufficient clues that an attentive reader can get the drift of where this is going, but there are some unexpected twists and turns along the way. The narrator/protagonist has his own connection to the Strafford mystery and some mystery of his own. He has lost his teaching job prior to the action of the novel through a scandal we learn only halfway through the book -- though it's not hard to imagine -- when it is used to discredit him in the eyes of his own love interest, Eve Randall, a Cambridge professor, much in the way that Strafford was alienated from Elizabeth.

Both protagonists -- because Strafford is the narrator of his long memoir -- are flawed and naive. Strafford subordinates his happiness to his political ambition, and Radford succumbs too easily to other temptations. Both are surprised that life should punish them so harshly.

Goddard succeeds though in showing how warring motivations can lead to bad decisions that do indeed have consequences and can result in irretrievable loss. Other characters, too, come alive with mixed motives and flaws of their own, creating conflict and drama that compels the reader as much as the mystery itself.

What first drew me to Goddard in Into the Blue was the setting in Greece, an exotic locale that came to life in the novel. This book begins in sunny Madeira, but quickly shifts back to rainy England. Nonetheless, it remains captivating. Goddard revels in the Englishness of the English countryside and painstakingly places each scene in some quaintly named location. We see the Exe River in Exeter and the Cam River in Cambridge -- it surely is no accident that both narrators are -fords. The pubs, the towns, the landscape all are vividly portrayed.

The "present" of the novel is 1977 (the book was first published in 1986), so that some characters can bridge the two narratives, and the author convincingly recreates each of these past periods. The novel also makes a stop in a 1951 so that the overall effect is that life indeed is a brief passage in time. Events come and go but people remain largely unchanged. The novel ends with Radford poised to make another decision about the future, and he must figure out how much is determined and how much choice we really have.

I corresponded at one point with an Amazon reviewer about Goddard. His opinion was that Past Caring and In Pale Battalions were his two best, with Painting the Darkness just behind that. In his opinion, the quality dropped off in the others. But that means I have least one more high-quality Goddard to read.
Posted by Darrell Delamaide at 11:03 AM