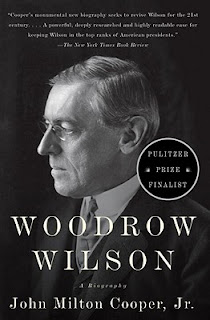 When I first joined Goodreads some time ago I hoped it would be that virtual book club that would let you discuss whatever book you wanted to read with other like-minded people without spending time reading books you weren't interested in. I could never make it work that way for me. The 50-state mystery challenge, for instance, never generated any real discussion, only people ticking off another state. But what can you say, really, about a mystery set in Utah if no one else has read it?

So now I'm trying something different -- joining in a common reading of the biography of the 28th president by John Milton Cooper Jr. This is a lot like being in a real book club and deciding you like the book other people chose, but I have been interested in Wilson for some time. Also, there is actually a reading schedule of about a chapter a week and a discussion thread for each week.

If I keep with it and comment often enough, I will probably update this post with my successive comments. The first one, today, covered the Prologue and Ch. 1, pp. 3-32 in the book:


It's interesting how little most of us know about Wilson or how vague our impressions are. What struck me is the claim that Wilson was not "Wilsonian" any more than Marx was "Marxist." Put me down for one of those who thinks of Wilson as a woolly-headed idealist. I look forward to Cooper's evidence debunking that idea.

The other thing that struck me about these opening pages was the description of Wilson as a transformational president. This is certainly the aspiration of the current occupant of the White House and it will be interesting to compare notes on the two presidents.

This quote from Wilson about how he lacked a scientific mind caught my eye: "I have no patience for the tedious toil of what is known as 'research'; I have a passion for interpreting great thoughts to the world." p. 51 Cooper. Even though Cooper goes on to say it was not quite true, it's an insight into Wilson's brimming self-confidence.

What surprised me most in these two chapters was the portrayal of Wilson as a passionate lover of his wife and a father who plays tag with his children -- only because my knowledge of him was limited to stern photographs like the one on the cover. I might have thought he was a taskmaster and disciplinarian so these anecdotes certainly round out the picture.

Posted by Darrell Delamaide at 3:00 PM