(Cross-posted in my food blog)

There seems to be a trend toward cookbooks that go way beyond recipes and into lengthy disquisitions on food and its cultural context. These are the books that are getting the awards and notice and I have acquired a few of them recently.

For instance, after a particularly wonderful Thai meal at a friend's house and hearing for some time that Thai cuisine is influencing chefs all over the world, I wanted to get a good introduction to Thai cooking. So I bought Thai Food by David Thompson. One of the Amazon reviewers noted that the book, written by an Australian chef who fell in love with Thailand, gets nearly to p. 200 before you have the first recipe -- so I went in with my eyes open. Opening sections deal with the country and its culture, the Thai kitchen and ingredients before tackling recipes.

This not essentially different from Julia Child, but much, much longer. Elizabeth David and M.F.K. Fisher were as much food writers as cookbook writers and many of their books take the form of the longer essays with recipes sprinkled through, so perhaps this new wave is simply a return to this more holistic view of cooking.

English writers seem to be leading the way. I recently bought two books by Nigel Slater, Tender: A Cook and His Vegetable Patch and Ripe: A Cook in the Orchard. Like Hugh Fearnley-Whittingstall's The River Cottage Meat Book before it, these lavish, long books are highly personal accounts of the writer's experiences with cultivating and cooking the meat, vegetables or fruit. I've never used many of the recipes from Meat, nor, truth be told, taken the time to read much of the author's musings on the subject. Nonetheless, there is something captivating about this approach and it might be rewarding to take more time with them. 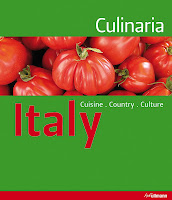 I have a number of cookbooks on Italian cuisine, but still I fell for two new books in this cooking tome genre. One is truly a massive tome -- Culinaria Italy: Cuisine, Country, Culture. It is part of a series edited by Claudia Piras and published by H.F. Ullman, a German publisher. I had to order it from England. It takes a regional approach, describing the culture and foods of Italy's various regions. Like the others in this genre, this book has plenty of big colorful photos printed on thick-stock paper. No doubt part of the motivation for this trend is to provide a different type of experience from printing a recipe at Epicurious. 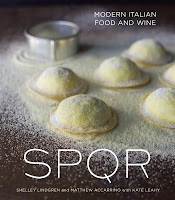 I also bought SPQR: Modern Italian Food and Wine by Shelley Lindgren and Matthew Accarino, who run a restaurant by that name in San Francisco. This is billed more as a guidebook, however, with on-the-spot descriptions of food and wine in Italy's central and northern regions. From what I've seen of the recipes, however, it falls into the usual trap of chef-written cookbooks of recipes that are complicated and use many hard-to-find ingredients. If it's only good to learn more about Umbria before we go there, it will be worth it.

Besides needing to compete with digital media, these books probably respond to the growing demand, verging on fetishness, for people to get more deeply engaged with food and wine. For many people, as for me, cooking and eating and drinking have become real hobbies in our era of plenty. How else account for the popularity of books like Mark Kurlansky's Salt: A World History or Cod: A Biography of the Fish That Changed the World -- neither of which, I hasten to add, do I own -- and the book I'm currently reviewing for Washington Independent Review of Books, Pepper: A History of the World's Most Influential Spice by Marjorie Shaffer.

In short, a hobby cook is invited to become a veritable scholar of food. Perhaps it all began with Waverly Root, the Paris-based American journalist whose 1958 tome Food of France really set the standard for this type of food writing. Root was writing for the International Herald Tribune still when I went there in 1980 and I saw him in the newsroom a few times. It was at that time, too, that Patricia Wells arrived with her husband, Walter, and embarked on her highly successful career as a food and cookbook author.

How much all of this will translate itself into great meals on our own table remains to be seen. I generally report my (successful) cooking experiences on my food blog, so I will track the results of all these lavish tomes there.
Posted by Darrell Delamaide at 12:42 PM