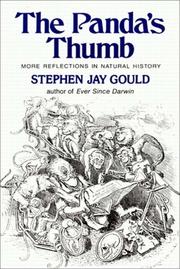 I was glad when somebody in my new book group suggested this collection of essays by Stephen Jay Gould as our selection for April. It had been sitting on my shelf (shelves, really, since it moved with me several times) for a good 30 years.

I'm glad I finally got to read (most of) it, but I understand now why it sat on my shelf for so long. Gould is an entertaining writer, witty and widely read. But these are unredacted columns he published on a monthly basis in the 1970s. This means the essays are pointed and informative, but also somewhat repetitive and shallow, and by now out of date.

As I said during our discussion of the book, what struck me most was how his openness to the facts of science challenges the reader to face up to legacy notions of creationism, intelligent design, and progress. Gould's full-blooded Darwinism leaves no room for a divine plan or a special place for mankind in creation. Even his concession that our cultural evolution is "Lamarckian" in nature -- we are able to pass on acquired attributes -- begs the question of how much progress mankind has actually made. There may be a way to reconcile this science to faith, but that's not my challenge and I'm not sure how it would be done.

I didn't get through all the essays, but I think the book served its purpose for me after the several I did read -- it opened my eyes to looking at the fact of the world we live in, the scale of time that it's in and the perspective on life that it brings. At one point, Gould observes that a mite who has impregnated his sisters before birth and dies a few brief moments after birth has made the same contribution to carrying on his species as Abraham and all his decades. Funny, true, but a pointed reminder that life is so much more than our biological function.

I have two or three other books by Gould sitting on my shelf, but I have the feeling that the window of opportunity for me to read them and get something from them has passed. I was not as enthralled by the science and scientific method on display here as some of the other members of the book group. I don't think that reading some more old columns with variations on the theme would enrich my life significantly, at least not in comparison to the pleasure or learning from alternative choices. So I may finally be able to pack these natural history books up to give away.

I also have several books by David Quammen. It's clear that the idea of natural history -- a holdover from my dinosaur phase? -- intrigued me. Quammen wrote the lead review in last Sunday's NYTBR, a history of the discovery of gorillas. I'll have a go at one of those to see how I like that author before packing them up, too.
Posted by Darrell Delamaide at 11:21 AM