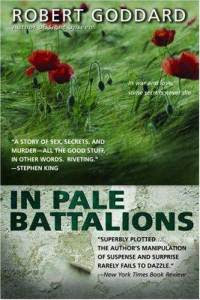 It is difficult to be so subtle and so dazzling at the same time, but Robert Goddard pulls it off in this mesmerizing novel. Once again, Goddard's mastery of the language alone makes the book a joy to read, and confirms my feeling that British writers -- Simon Mawer and Rennie Airth are other examples -- have an edge over us Americans when it comes to language. Chaucer and Shakespeare are lurking in their descriptions, their dialogue.

In Pale Battalions also has a finely crafted plot. It is part murder mystery, but so much more than that. It deals with World War I and the hopelessness and futility of that conflict. (I had just read Peter Englund's The Beauty and the Sorrow which so graphically portrays the war from the journals and letters of eyewitnesses; I will post my review here once it is published in the Washington Independent Review of Books.)

But the war itself is just a backdrop for a study in how challenging trust and integrity can be, how easily we are susceptible to corruption, and how difficult it is to be tolerant of our own failings and the flaws of others. Although the tribulations of the family of Lord Powerstock are particularly dramatic, the impact on the family members is not so different from the more mundane trials that all of us have experienced in family life. The secrets and the lies that follow through the generations are told here, whereas most of us may never be aware of the hidden events in our family trees.

When he is given leave to convalesce for a wound sustained in the Somme, Tom Franklin goes to stay with the family of his friend and commander, John Hallows, who was reported killed in action earlier. He falls in love with Hallows' wife, Leonora, who seems caught up in a web of blackmail and who surprisingly has become pregnant shortly after her husband's death. The conniving of Leonora's step-mother-in-law and an American adventurer intent on gaining control of the estate set Franklin and Leonora both fateful journeys that do not have happy endings.

Their are further twists and turns as the anonymity imposed by the war leads to a succession of mistaken identities and past failings of family members have consequences in succeeding generations. Goddard contrives to have a number of first person narrators tell the story, and not all of them are reliable. He slowly draws back the veils revealing a new dimension of truth to a picture we thought we had figured out, right down to the last pages with a final, surprising twist.

Reading this often tragic tale, you cannot keep your same certitudes about what constitutes courage or cowardice, or even right or wrong. Can you combat evil only with good, or must it be fought in kind?

The story stretches over four generations so many of the main characters are dead by the end. This lends their story a fatalistic perspective -- in the end, what really mattered in their lives? There is the hope that Leonora's daughter, another Leonora, and her daughter, Penelope, have grown in character from the revelations about their family history. The same may be true for us as readers.
Posted by Darrell Delamaide at 8:33 AM