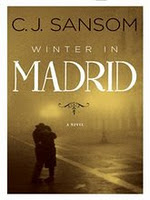 C.J. Sansom is a master of the historical novel and like his Matthew Shardlake books this one succeeds in totally immersing you in a different time and place. He makes you feel like you've taken a time machine back to Madrid in 1940, when Franco had won Spain's Civil War and imposed a dictatorship on the country that was to last 35 years.

I spent six weeks in Madrid in 1972, when Franco was still in power and the odious Guardia Civil was still omnipresent. It was with a shock that I realized that the action of this novel, set in 1940, was closer to 1972 than my stay in Spain is to today! While Spain had largely recovered from the ravages of the Civil War by the time I was there, Sansom's descriptions nonetheless took me back to my own experience of the oppressiveness of his rule. Even the short scene in Burgos, where I had simply stopped on a weekend trip, brought memories rushing back.

Here is another hero named Harry, this one Harry Brett, who actually is similar in some respects to Goddard's Harry Barnett. Like an Eric Ambler character, Harry is an innocent caught up in an espionage plot that makes him confused and uncomfortable, but as a loyal, if naive, British subject, he dutifully goes along with his assignment to spy on an old chum from public school days who has landed in Madrid and appears to literally have found a gold mine there.

In fact, Harry and this old chum, Sandy Forsyth, who was expelled for a nasty prank against one of the teachers, and a third student at the school, Bernie Piper, seem linked by a strange karma. Piper joined the International Brigades to fight for the Spanish Republic and was missing in action, believed killed. His former lover, Barbara Clare, a Red Cross nurse, turns in her grief to Forsyth, whom she meets by an improbable but nonetheless believable coincidence. Harry knew Barbara from the time in 1937 when he came over to console her on the news of Bernie's death.

There is a love triangle, though not perhaps the one you expect, as the plot develops in a fashion that seems leisurely but actually moves at a good clip, considering the action is compressed into a period of just a few weeks. Harry's very naivete makes him somewhat successful as a spy, and he is able to win Forsyth's confidence and find out about the gold mine, which Sandy is trying to sell to the government as a way to pay for much-needed imports.

Against the backdrop of a Madrid in ruins from the war and on the brink of starvation from successive crop failures and a British blockade on many imports, Harry must deceive not only Sandy, but also Barbara, who has secret plans of her own. The deprivation and oppression are palpable as Sansom skillfully layers the compromises and betrayals each of these British characters, as well as their Spanish counterparts, must make.

There are a couple of flaws. For some inscrutable reason, Sansom seems obsessed with the idea of having everybody (except Harry) smoking all the time. Yes, it's fine to remind the reader that people in this period, in Spain as well as England, smoked all the time, but he carries it to a level of distraction. He could have made his point with a fraction of the references to characters lighting up and blowing out clouds of smoke. He once tells us twice within the space of two pages that Sandy "lit a cigar," though insufficient time has elapsed to have finished the first one and it is clearly an authorial and copy editing oversight.

Another flaw is that the action of the novel, despite all the frost and cold, takes place in the autumn. Harry, in fact, does not spend the winter in Madrid, but arrives in early autumn and actually leaves on the first day of winter. Even if Sansom also means the title to be metaphorical, it is technically "Autumn in Madrid" and much of the plot would not work if it was actually winter.

These only detract marginally from a book that gives you characters to care about, a meticulous recreation of a period and a place that are crucial to understanding the 20th century, and wonderful immersion in language and style.
Posted by Darrell Delamaide at 1:13 PM