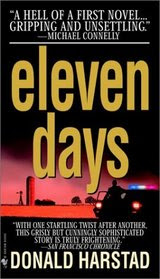 Donald Harstad's police procedural set in small-town Iowa starts with a Satanic multiple murder and gets more complicated from there. His first-person narrator, Carl Houseman, deputy sheriff in Nation County, tells the story in a deadpan, occasionally stream of consciousness voice that is original, authentic and engaging.

Since Harstad was a longtime cop, the police procedure is painstakingly depicted and presumably 100% accurate, sometimes almost intrusively so. In the end, the unraveling of the crime, and its connection to previous crimes, hurtles along at such a pace -- all in eleven days, after all -- that no amount of 10-4s and 10-78s can slow it down.

Houseman is a good cop, with all the cynicism one would expect from a veteran in law enforcement, but an innate enthusiasm for his job that makes him excited getting up every afternoon and going to work. He is a good storyteller. He reminded me of my brother, who was a police officer for 30-some years.

You spend a lot of time in the squad room, which is really the kitchen of the small office, conferring and kibitzing, sorting through clues, manipulating the multi-layered bureaucracy of county and state law enforcement, with a New York specialist thrown in. And yet Harstad keeps this as taut as the action scenes that punctuate the grind of the investigation.

The author is particularly skillful in creating small-town characters, with their quirks, their petty jealousies, their surprising depravity. He is far less interested in setting the scene. There is virtually no sense of being in Iowa -- the plot could just as well have been set in Connecticut or Mayberry. One of the joys of reading these mysteries set in different states, of course, is to get that sense of place and that is almost totally missing from this novel.

But no one says he has to oblige readers doing a 50-state mystery challenge by having his state's scenery or geography play a major role. The decentralized but relatively small expanse of Iowa, with officers and evidence shuttling between Des Moines, the fictional Maitland and Dubuque gives a little bounce to the narrative.

The twists and turns in the plot are satisfying, the red herrings are not too red, and the identity of the killer is intimated enough towards the end that it is not a shock when it is finally revealed. There is (just) enough action and not an excessive amount of blood in the two-step climax.

The real winning quality, though, is the friendly, funny, solid as a brick narrator -- a character who does show what the heartland is all about. It's good to know that there's already a number of sequels with him around.
Posted by Darrell Delamaide at 8:10 PM