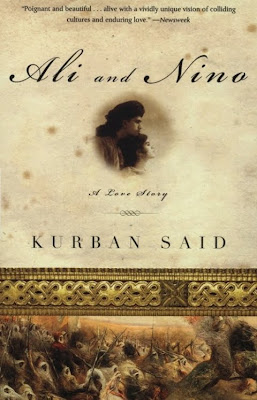 This novel by Kurban Said is subtitled "A Love Story" and it has something of a cult following. It is a remarkable and unusual book. The love story of Ali Khan Shirvanshir and Nino Kipiani begins in their school days in Baku and survives ethnic animosity, kidnapping, exile and even revolution. This relatively short novel has all the epic sweep of a Doctor Zhivago, painting whole new worlds for the reader to explore.

Azerbaijan was the Saudi Arabia of the first half of the 20th century, supplying a good portion of the world's oil. Shiite Muslims predominated in the Turkic-speaking country, which bordered on Christian Georgia and on Iran. The capital, Baku, located on a windy peninsula on the Caspian Sea just south of the Caucasus Mountains had a mixed population living in relative harmony. Ali was Muslim with Persian roots and Nino was Christian with Georgian roots.

Their meeting with each other's families had more comedy than tragedy as the two young people were fully exposed to the divergent traditions of the more European Christians and the more Asiatic Muslims. It is the tension between these two cultures -- wine, beds, tables and silverware on the one side and tea, divans, carpets and fingers on the other side -- that surfaces in various forms in the novel.

Though young, Ali and Nino cannot escape their cultural heritage. While his love for Nino is unshakeable, Ali cannot shake his culture's attitude toward women or the role of men in society. Nino is horrified about the possibility of having to wear a veil or become part of a harem. In cosmopolitan Baku, they can juggle these differences. But the onset of World War I, disrupting the Czar's distant rule of Azerbaijan, also interrupts this comfortable state of affairs.

The first sign of real trouble is when a rich Armenian, who had won Ali's friendship by interceding with Nino's family to permit their marriage to go ahead, kidnaps Nino and flees with her in his motor-car. Hot-blooded Asian Ali pursues, catches up with them and kill his erstwhile Armenian friend, plunging a dagger into his chest just above the heart. Nino confesses that she was complicit in the abduction, at least in part, because of the Armenian's arguments about what would happen to her if the Ottomans took over Azerbaijan. Ali can forgive, but when his father asks him why he did not also slay the girl, all he would say is that he was too exhausted.

The couple enjoys an idyll in a mountaintop retreat where Ali is "hiding" from retribution for the murder, but after their return to Baku they are forced into a more serious exile to Teheran, where they live in princely comfort among their relatives but where Nino is forced to abide by Muslim strictures and not show herself in public. Ali feels the tug of his Muslim roots and, partly to settle his Muslim identity, takes part in a primitive ritual of self-flagellation that horrifies and repels Nino.

Even so, they return together to Baku when Azerbaijan celebrates its brief period of independence. That dream comes crashing to an end when the new Red Army arrives to seize Baku's oil after the overthrow of the czar.

It is a love story that goes beyond Romeo and Juliet because these are not feuding families in a settled culture, but two radically different cultures mixed together at the crossroads of Europe and Asia. It is enchanting, not only in it depiction of the tender love between the two protagonists, but because of its loving description of the complex world they live in.

The identity of the author, Kurban Said, has become a minor saga in its own right. Tom Reiss, first in an article for The New Yorker and then in his biography The Orientalist makes the case that Lev Nussimbaum, a Jewish emigre born in Baku in 1905, is the author behind the pseudonym, though this is disputed.

It is a fascinating story, but another story. You don't need to know anything about the author to enjoy Ali and Nino. It sweeps you into an exotic, at times terrifying new world that is as old as the sands of Central Asia. It is an historical saga that is totally satisfying as a novel, and it will enrich your understanding of the cultural rift between two worlds.
Posted by Darrell Delamaide at 8:23 AM