The Last Kabbalist of Lisbon 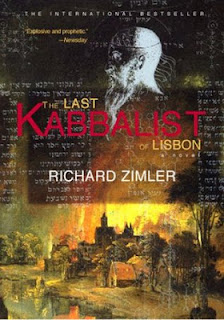 This historical novel by Richard Zimler is compelling and well-written, but tough going. The narrative covers several days of the 1507 massacre of "New Christians" -- forcibly converted Jews -- and makes for often gruesome reading. Zimler spares few details of dismemberment and burning, sudden death and suffering in the frenzy of persecution.

But those tragic events are the backdrop for a mystery involving betrayal within the Jewish community. Berekiah Zarco's beloved uncle, the leading kabbalist in the community, is slain during the riots not by Old Christians but by someone within his inner circle who knew his secrets. These are not kabbalistic rituals, but the safekeeping and smuggling of forbidden Jewish manuscripts. Berekiah, a young illuminator and would-be kabbalist, finds his uncle's body in compromising circumstances but knows from the manner of death and location of the body that one of possibly half a dozen people was the culprit.

He sets himself to find out who killed his uncle and to avenge him. He must fight his own grief and the skepticism of the grieving survivors in his family, while avoiding the ever-present risks of the sectarian violence.

Zimler narrates all this with a tactile feel for medieval Lisbon and an authoritative understanding of the Jewish milieu. He never takes time out to pendantically explain kabbalism, and in fact this esoteric Jewish practice does not play a major role in the plot. Rather it colors the characters and lends further mystery to the action.

The story is about remaining true to your beliefs in a time of deceit, and loyal to your comrades when betrayal can save your life. Many of the characters make some compromise to survive, but there is a clear line separating those whose faithlessness costs the lives of others. Berekiah comes to see that his uncle's killer is not the only villain.

Unraveling the mystery is an intricate and sometimes bewildering process as Berekiah suspects and then clears each of his uncle's inner circle, only to have them fall under suspicion again as new evidence emerges. The reader has to do some work to keep track of the comings and goings of the characters.

The story is framed by Berekiah in later life in Constantinople and his decision to go back to Lisbon and bring his remaining family away from Christian Europe into the safety of the more tolerant Muslim domains. The portrayal of Old Christians, and especially the Dominican Inquisitors who fomented the massacre, is unrelentingly harsh. The bleakness and cruelty of medieval society portrayed here is reminiscent of Arras under the plague in Andrzej Szczypiorski's A Mass for Arras.

Berekiah is skeptical that Christian Europe will ever be safe for Jews and of course the events of the 20th century bear this out. But neither are the Muslim domains and perhaps the real lesson is that no one is ever safe from bigotry.
Posted by Darrell Delamaide at 1:10 PM