A Mass for Arras 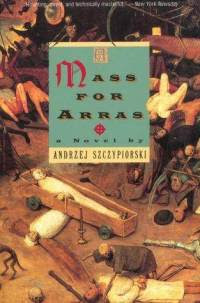 This book, the most widely known work of Polish author Andrzej Szczypiorski, is both depressing and disquieting. The medieval tale of faith versus reason, perception as reality and runaway mass hysteria, a story of corruption and damnation, is far too close to our current situation with the intolerant right-wing "Christians" for comfort.

There are no heroes in this novel. The narrator, Jan, is temporizing and profoundly corrupt. His mentor, Father Albert, who imposes a reign of terror on Arras, is mad with zeal -- but a cynical, knowing zeal -- and much too reminiscent of some of the ultra-right-wing Catholic governors like Scott Walker and Chris Christie, who now are imposing their crazy ideology on a captive citizenry. Bishop David, the bastard son of the Duke of Burgundy and a benefactor of the narrator, is cynical, agnostic and capricious.

Szczypiorski first portrayed Arras in the grip of the plague, a frightening descent into cannibalism and licentiousness. But worse was to come. The plague, in fact, unhinged the populace and led to a new frenzy of anti-Semitism and witch hunting, which resulted the executions of an dozens of citizens in an escalation of terror (ironically, even the executioner was executed after he accepted a bribe from one of his victims to kill him cleanly and quickly).

It culminates with Father Albert dying a slow and ugly death of dropsy, and David arriving in time to stay the execution of the narrator and then consign Arras to oblivion by forgiving the perpetrators and telling them "this never happened."

It is in part a philosophical novel with long and passionate arguments about faith and reason and integrity that probably bear more careful reading than I gave them as I barreled along in dismay following the terrible course of the narrative. But that is part of what makes the novel depressing, because Jan's lofty sentiments are undermined by his own lack of integrity.

Arras is a town in what is today northern France and historically is part of Flanders. It is near Cambrai, where my grandfather was born, and it is the origin of my brother Darras's name -- Darras is a common surname in this region, indicating people from Arras. I originally bought this book in German but never got around to reading it, and the other day, as I was writing about Darras's name in my BAKpedal blog, I ordered the English translation. It seems to me I passed through both Arras and Cambrai at one point. Both were badly damaged during the world wars but preserve some nice Flemish architecture.

The Duchy of Burgundy beckons across the centuries as a civilization almost as lost as Atlantis. Originating in Burgundy, the French region that gives its name to the wine, it extended as a patchwork of fiefdoms in an arc through the Low Countries, incorporating much of what is today Belgium. At its zenith in the 15th century, which is when the action of this novel takes place, it was a prosperous region with a reputation for high living. To this day, a Belgian who enjoys his food and wine is called a "true Burgundian."

It is the very prosperity and success of these rich areas -- Arras was a prime center for tapestries -- that makes the city's descent into a faith-driven savagery so frightening. The wealth and sophistication of the city did not prevent its enslavement to ignorance and fanaticism. Once the fanatics seized the levers of power, not even the urbane Count de Saxe with all his wealth was safe from the town's fury. But he at least showed the integrity of a genuine secular humanism and went courageously to his death, unlike the craven narrator, who understood his own cowardice and was able to live with it.

Since I learned that the name Delamaide is derived from La Hamaide castle outside of Brussels -- and this is why the Delamaides were found around Cambrai and Arras -- I have felt an affinity for this old Duchy of Burgundy. Their reputation as bon vivants doesn't hurt, either. The narrator of this novel speaks of Ghent and Utrecht; he relates his tale after settling in Bruges, that Flemish gem of city. It is a corner of Europe that should have been safe from the horrors described in this book. But it wasn't, and that's the message Szczypiorski, who took part in the Warsaw Uprising and survived Sachsenhausen to become a successful writer in Communist Poland, drives home. No one can say "It can't happen here" with any degree of certainty.
Posted by Darrell Delamaide at 11:54 AM