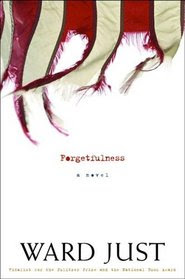 Ward Just is always hard to classify and this novel is no exception. Here's what we know: Just is a fine craftsman -- his writing is lucid, not lyrical but able to conjure up a scene, a feeling, an atmosphere. He spent considerable time in France as an expatriate, I'm guessing, because his books with that kind of setting are filled with an authenticity and level of detail you can't get any other way. But he doesn't feel obliged to stick to any one kind of setting or even genre.

Just is part of the dying breed of solid mid-list authors. He doesn't write glitzy bestsellers. His plots are tame and his writing abjures pyrotechnics. He is decidedly quirky. In this book, for instance, he forgoes quotation marks so that dialog appears largely as indirect discourse. This is all very French, but not something we expect from an American author.

The protagonist here, Thomas Railles, is a portrait painter, pretty much retired in southwestern France, who at one time dabbled in odd jobs for the CIA because two of his hometown buddies worked for the agency. The story begins with Thomas's French wife, Florette, twisting her ankle during a walk by herself in the nearby Pyrenees. She is unable to walk and it is getting cold and dark. A band of foreigners -- smugglers? -- picks her up and carries her some distance before abandoning the effort. She is found dead the next day, her throat slit.

It emerges that the four men may have been Islamic terrorists. Thomas's buddies, who were visiting him and distracting him when Florette embarked on her lonely walk, speculate it might have something to do with Thomas's CIA past. Just never resolves these ambiguities for the reader. When, in somewhat contrived fashion, the band is later tracked down by French security forces, the leader, Yussef, said she was a silly woman who recklessly walked by herself and who had died of the cold before he half-heartedly attempted to slit her throat as an act of mercy. The doctor in Thomas's village said Florette might have survived hypothermia if she had been found just an hour earlier, implicitly blaming Thomas for her death because he was busy regaling his friends with stories well after he should have expected Florette to return and was late in embarking on a search for him.

There are flaws with this plot. Why would these men even waste any time carrying Florette down the mountain if they truly were terrorists? If they did bring her closer to rescue, why did it take so long to find her?

But Just's focus is more on Thomas, what he has made of his life as a painter. It's about his regrets, some things he's forgotten, but far worse, some things he can't forget. One clandestine assignment involved betrayal of a Spanish communist that resulted in his death, and Thomas felt guilty being involved in the assassination of a man he painted and considered to be essentially a good man.

The question Just seems to be driving at is how can we blame anyone or seek revenge for the seeming randomness of death. In a post-9/11 world, he seems to be saying, Americans may be engaged in a futile attempt to fight a ghostly Islamic enemy that is not really the principal threat in our lives. In all likelihood, Florette would have died of exposure on the mountain without any intervention from the terrorist band, because she was, as Yussef suggested, careless in walking on treacherous terrain by herself and Thomas was, as the doctor suggests, negligent in starting up a search for her.

Thomas is not really very sympathetic. He waves off any guilt in Florette's death much as he has waved off any real responsibility for any of his actions. Another friend of his, St. John Granger, had died of old age in the previous week. Granger improbably was a British deserter from World War I, presumed dead with his name engraved on a monument in northern France. His hidden life in a forgotten corner of France is a metaphor for Thomas's own cryptic existence.

Just's achievement is to open up these wide vistas through a relatively compact story. At the end, Thomas has a Fellini-esque meeting with one of his old hometown buddies, presumably his last, and is left sitting literally in a fog, with his best hope that he will forget things.

It was easy for me after my years in France to relate to Thomas's existence in Roussillon. I had a friend in Paris whose parents lived down there and so I visited a couple of times. Just's descriptions are tellingly accurate down to the smallest detail and he is clearly a francophile, even when he portrays common French faults.

The only other book of Just's I can remember reading is his 1991 novel The Translator, also set in France, though it seems to me I've read at least one other (obviously I have no trouble forgetting). I bought this one on remainder. I'll see how long it stays with me to decide on future books.
Posted by Darrell Delamaide at 8:56 AM