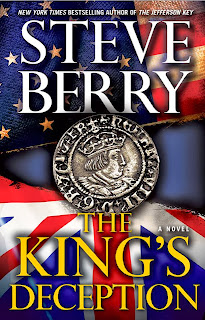 Steve Berry sells a lot of books, but I think he owes most of his success to Dan Brown. This inoffensive but undistinguished novel is the latest in his Cotton Malone series and has many elements of the Brown formula -- a twist on a famous historical figure, exotic historic locales that act as time machines to unraveling the mystery, action compressed if not into 24 hours then a very brief span of time, a protagonist who is oddly hollow and characterless. With no sex and little on-stage violence, The King's Deception could qualify as a crossover for the young adult set, especially given the prominence of two adolescent buddies.

But it's enough for me. I enjoy thrillers about odd historical twists and can put up with undistinguished writing as long as it's not clumsy. The book has historic locales aplenty. In fact, Berry even acknowledges in a writer's note that he was able to add more because that volcanic ash from Iceland that year kept him in London three days longer than he planned. So if Cotton Malone's odyssey during the novel seems a bit random and arbitrary, it's because it is. So we see Hampton Court and the Tower of London and the Middle Temple of the Inns of Court, and get to visit some underground sewers.

It hardly requires a spoiler alert to divulge that the premise of the book is that Elizabeth I was an impostor. The real princess died in her teens and the impostor who succeeded to the throne was in fact her illegitimate nephew -- and a man. All the usual arguments -- the fact that Elizabeth never married, was known as the virgin queen, wore clothes that disguised her figure, never let anyone touch her or doctors examine her, insisted that portraits show her as a 25-year-old -- are marshaled to support the thesis.

Well and good, though the plot Berry has concocted around this kernel of alternative history is pretty far-fetched. A CIA operative of dubious character is pursuing the truth about Elizabeth in order to blackmail the British government into not granting a compassionate early release to the Lockerbie terrorist, diagnosed with terminal cancer. While this is clearly a true outrage for the author and his characters, Berry may be overestimating its power as a spring for this kind of plot.

But it gets worse. The reason the British would be susceptible to this blackmail is because the truth would render Elizabeth's reign illegitimate, and call into question the legitimacy of all her actions, especially the leases she gave in the Irish counties that now constitute Northern Ireland. In short, all hell would break loose because Irish nationalists would discover a new reason to challenge the British presence there. Berry may also be overestimating the devotion of the British to the rule of law, or at least the ability of American readers to suspend disbelief about such an improbable consequence.

The villainous and manipulative head of MI-6, or, as Berry snarkily insists, the SIS, to call it by its proper British name, is a knight of the realm, though anything but chivalrous. The CIA operative turns out to be ot only a cad, but a traitor and meets the fate that thriller writers have for his ilk. The female British agent from the Serious Organized Crime Agency who goes rogue from her service to help Malone is as bland and two-dimensional as her name, Kathleen Richards, would suggest. There is no romance in the novel, and Berry tells us in the Epilogue that the brief fling she and Cotton had afterwards was just that, no doubt keeping things open for Malone in a later episode to finally be reunited with his long-suffering ex-wife.

I was in the mood for some light reading, and it doesn't get any lighter than this.
Posted by Darrell Delamaide at 9:07 AM