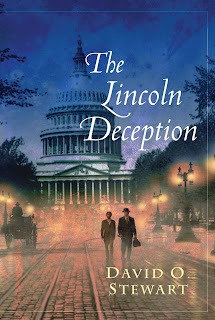 An accomplished author of several nonfiction historical books, David Stewart predictably comes up with a good story. But his skill in a debut novel at creating characters, crafting dialogue and pacing narrative is less predictable and a real treat. In prose that is lean and nimble, Stewart draws the reader into a novel that is part detective story and part buddy trip, with a dash of picaresque, as his characters seek to uncover a Confederate link in the conspiracy to assassinate Lincoln 35 years after John Wilkes Booth shot him in Ford Theater.

Stewart drew his inspiration from a short passage in his historical research indicating that Mary Surratt, one of Booth's co-conspirators who was hanged, confided a secret about the assassination to John Bingham, the lawyer who prosecuted her, before she died. In Stewart's fictional re-creation, Bingham in turn tells his doctor, Jamie Fraser, about the secret on his deathbed, without revealing what it is. This sets Fraser off on a quest to unravel the mystery.

There are enough contemporaries still alive in 1900 that Fraser's quest is anything but hopeless, as he pores through Bingham's notes and research on the assassination for possible leads. His quest takes him to other writers and researchers as well as to relatives of co-conspirators. Not all of the people he contacts wish him well, nor does everyone tell him the truth. Along the way, Fraser teams up with Speed Cook, a black former baseball player and would-be newspaper publisher. He also embarks on an unexpected and improbable romance with a former actress who has links to the Booth clan.

Stewart deftly situates the reader in the past as his familiarity with contemporary source material enables him to provide the telling detail while avoiding clumsy anachronisms. His language is vaguely archaic without ever being stilted, and frequently lightened with witty observations in the dialogue and point-of-view narration. The history detectives pursue their clues from Ohio to New York, Baltimore and Washington, often just ahead of powerful interests who do not want them to find out Surratt's secret. There is action and adventure when they do fall into the clutches of the villains.

The question of whether or not the Confederacy was actually involved in Lincoln's assassination, or what their motives might be given that Lee had already surrendered, is probably more interesting to professional historians than to the general reader. As one of the characters observes, knowing isn't going to bring Lincoln back. The resolution thus may seem anti-climactic to those who are expecting a blockbuster surprise. But this is not a "what-if" novel in the burgeoning alternative history genre. Rather, it is a creative imagining of details that fit with the known facts but remain hidden to us so far.

It is the journey rather than the destination which makes The Lincoln Deception such an engaging read. It is a chance to step into a time machine and play history detective with very well-informed guide.
Posted by Darrell Delamaide at 9:25 AM