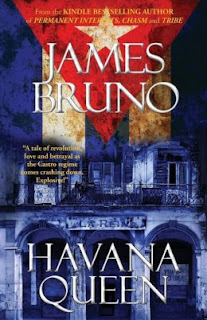 State Department veteran James Bruno combines his insider's view of the complex machinery of the U.S. government with his firsthand experience of Cuba to create this compelling scenario of how the Castro regime may, finally, come to an end.

Bruno's great sense of place, already evident in his earlier thrillers, comes to the fore, taking the reader to the streets of Havana and Santiago and to the bizarre world of the Guantanamo Line, where one of the world's last remaining Communist regimes and an illegal American occupier coexist.

Against this colorful backdrop, Bruno creates a fast-paced plot of the endgame in Cuba, as the corrupt regime of the Castro brothers faces its own group of militant rebels determined to throw them out just they had ousted Batista in the 1950s. An intrepid FBI agent of Cuban heritage, Nick Castillo, is drawn into this drama, making common cause with the rebels even as he falls into an ambiguous relationship with the designated heir of the Castros, Che's (fictional) daughter, Larisa Montilla.

The action includes the inter-agency conflict between the FBI and the CIA embodied in Castillo's own discordant relationship with Kate Kovalchuk, an "ice princess" paired with Castillo to find out just what is going on in Cuba as hardship and government paralysis drive the people to rebel against the failed regime.

Bruno has a healthy respect for the tenacity of a corrupt regime to cling to power. He also depicts how foolish it would be to underestimate the extent to which Cuban intelligence has infiltrated our own government with all-too-real vignettes of traitors at work. Just because the Castros are incompetent in running a country doesn't mean they aren't masters of espionage and sabotage.

In fact, in a final act of defiance, the dying regime in Cuba is ready to strike at the very heart of its giant nemesis to the north by setting in motion a plan to assassinate the president of the United States even as all is lost.

This is the dramatic denouement as rebel forces appear to win the day in Havana and Santiago, forcing Nick and Kate to return to the States in a last-ditch effort to foil this final plot.

Bruno's timely novel will have you checking the news to see how much of his scenario is taking place right now. His sympathetic portrayal of a society waiting to rejoin the civilized world will have you rooting for them, too, and the day when this last bastion of Leninism joins the dustheap of history.
Posted by Darrell Delamaide at 11:30 AM