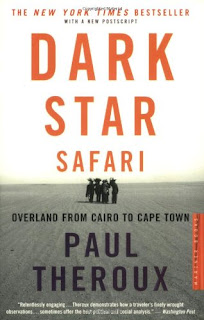 Paul Theroux wants you to know exactly how hopeless Africa is. To prove it he undertook a journey overland from Cairo to Cape Town, largely through East Africa, bringing his vastly cynical powers of observation to yet another trip.

As I said in our book group discussion, I am in awe of Theroux's writing -- his ability to observe and describe places, people and situations. He is a compelling writer with great talent.

His venturing into places like Ethiopia and Sudan, which most of us will never visit, gives the reader a precious view into these societies.

That said, I found I could read this book only in small doses. His unrelenting cynicism and condescension and general unlikability put me off. We discussed in the group whether you have to like a writer to like his or her book. The problem is that in travel writing, which is essentially a memoir,  the writer's personality will intrude, which doesn't necessarily happen in other genres.

I finished only about a third of the book before our discussion. And, though I consider it better than the 3 or 4 earlier books of his I've read, I will probably put it aside for a while, and finish it, if I do, at a later date.

One of the points I made about Africa is that we see it as ridden with ineradicable problems because we are demanding that they organize their society the way we do. Africans lived happily in more primitive circumstances until two centuries ago, when Europeans invaded in a serious manner. In a global economy, of course, there is no way to preserve that primitive society. But rather than let Africans evolve at their own pace and in their own way, we have imposed a Western template on them that does not seem well suited.

Perhaps, I suggested, the inevitable Chinese colonization of Africa, as that ravenous economy scours the planet for natural resources, will provide new impetus for modernizing African society.

Maybe Africa is hopeless. But at various points, India, China and Brazil also seemed to have insurmountable problems. They have not yet succeeded in overcoming all of them, but they have advanced considerably.

Theroux's anecdotal account of his idiosyncratic journey through Africa makes for entertaining travel writing, but it is hardly the basis for any considered judgement about the future of the continent. It may already be outdated and someday, no doubt, it will appear as quaint as the 19th-century travel journals do to us today.
Posted by Darrell Delamaide at 9:03 AM