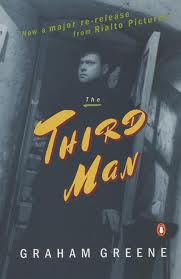 "One never knows when the blow may fall." Anyone who thinks the book can add nothing to the marvelous Carol Reed film "The Third Man," need read no further than this first line to realize that some of Graham Greene's genius could not be translated into film.

This was one of the revelations from taking part in Jim Grady's 2-hour "seminar" on Greene at Politics & Prose. Grady -- author of the novel that led to one of the best spy films of all time, "Three Days of the Condor" -- has a keen eye for what makes a book suspenseful, but also dramatic in the full sense of the word.

He said one of the keys to Greene's success was his insistence on the necessity of morality. "The writer takes a moral position," Grady said. He recommended John Gardner's On Moral Fiction for a further discussion of that aspect. (I have The Art of Fiction on my shelf, and have now ordered the other one.)

The mood of dark disorientation holds for the novel The Third Man as well as the movie. Oddly, the book was published after the movie came out. Greene said he needed to write a fuller treatment in order to write the screenplay. Differences between the two come from changes made in the course of filming. 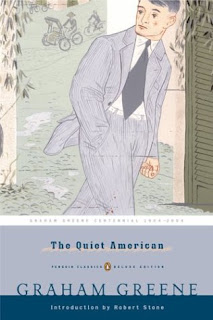 The ability to suddenly drive home a universal truth with a dazzling economy of language makes this a far more finished work that the modest introduction might suggest. "We never get accustomed to being less important to other people than they are to us" is a sentiment almost anyone can identify with.

Then there is the great line delivered with such panache by Orson Welles in the movie: "In Italy, for thirty years under the Borgias, they had warfare, terror, murder, and bloodshed, but they produced Michelangelo, Leonardo da Vinci, and the Renaissance. In Switzerland, they had brotherly love, they had five hundred years of democracy and peace - and what did they produce? The cuckoo clock."

In discussing The Third Man together with The Quiet American and Our Man in Havana, Grady said he was looking for "noir" novels. The three books also took place at pivotal moments in American history -- Europe as the Cold War began, Indochina as surreptitious American involvement began, and Cuba before Castro's coup. And, Grady noted, in all three, the hero was responsible for the death of someone important. 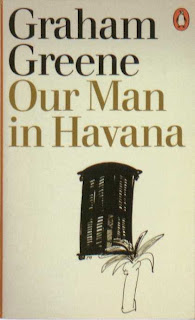 I didn't have a chance to re-read American and Havana for this discussion, so I remained mostly passive. I felt, perhaps because I had read it recently, that the discussion on Third Man was more stimulating. I remember finding Quiet American chilling. At the time, it it fit in with a class I'd had in college where the teacher talked about the dangerous naivete of Americans, as illustrated in the class by Herman Melville's Benito Cereno.

In the P&P discussion, one participant noted the similarities between Havana and Tailor of Panama, so exactly parallel you might think Le Carre was paying homage to Greene. The latest chronologically, it was the lest favorite of the group, seeming more like a satire or farce than a genuine noir novel.
Posted by Darrell Delamaide at 2:38 PM