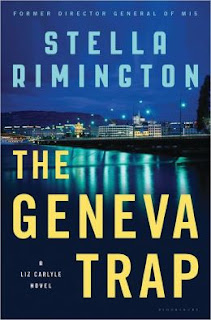 The settings and, for lack of a better word, the tradecraft move this lightweight thriller by Stella Rimington along. The author, a real-life M as the former DG of MI-5, has written a series of novels featuring Liz Carlyle as an agent. While this one, at least, lacks the panache of a James Bond tale, it has that reliable, competent prose that well-educated Brits bring to their writing and a view of true-life espionage with its feet firmly planted on the ground.

This one takes place largely in Geneva and Marseilles, as well as London, and that was part of its charm for me because it gave me a chance to revisit some places I have fond memories of. A brief side-trip to rural southern France, evocative of the Bruno novels, didn't hurt, either.

The main plot involves foiling an effort to infiltrate and sabotage an Anglo-American drone program. A subplot, unrelated except that involves the same characters, starts with protecting a former member of a cult-like counter-culture group and ends with foiling a plot to attack a G20 meeting in Avignon.

The British intelligence services portrayed here are not Le Carre's gloomy, traitorous dens any more than they are Fleming's fantasies. Rather, they are workmanlike versions of a domestic police force, where ordinary, fairly well-trained officers get on with their business. They are mostly pretty nice. Liz Carlyle is, of course, quite sympathetic, and her superiors and co-workers, despite some personality quirks, are at least well-intentioned. Her boyfriend in the French intelligence services is also nice; ditto for his co-workers and superiors. The pragmatic, conscientious agents in Switzerland are also...nice. Even the Russian traitor is nice and the North Korean mole comes across as an unfortunate waif. The only real meanies are the Russian pulling the strings of the drone plot and the French lowlifes plotting the G20 assault.

Perhaps intelligence work really is this congenial, at least viewed through the prism of a stiff-upper lip grande dame. If Le Carre and his imitators are too gloomy, these may err in being too cheery. But you have those great settings and that authentic tradecraft.
Posted by Darrell Delamaide at 11:40 AM