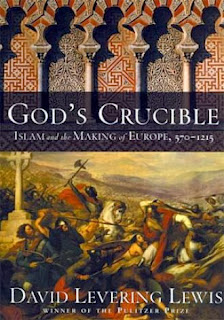 This nonfiction book by David Levering Lewis is subtitled "Islam and the Making of Europe, 570-1215," so it illuminates what we treated only briefly in school as the Dark Ages. Lewis's dense narrative is authoritative and comprehensive, and I found what I read of it intriguing and enlightening.

However, it is a dry and essentially academic book so my sessions usually ended with me falling asleep in the chair and I was only able to read "in" it. Some of our book club members were much more thorough. They generally concluded it is indeed interesting to see that period of Europe from the "other" side, but found Lewis a bit too glowing in his descriptions of Islam's contributions and a bit too negative about Europe.

When one of our members read a passage about how Europe might have been happier if Charles Martel had lost at Poitiers, given the years of feudalism that lay ahead in Europe, my question was whether now in the 21st century one would be happier in Europe or Saudi Arabia. In both cases, there has been an organic evolution from the 8th century. Nor was the intervening period in Europe without its accomplishments.

I can't say whether this book explains where Islam went wrong, but no one in the group mentioned any explanations. In discussing how much further advanced the Muslims were in the arts and sciences than Western Europe in this period, I made the point that everyone was more advanced -- the Byzantines, the Alexandrians, and the Persians whose defeat opened up the Middle East for the Islamic jihad. There is no indication that something intrinsic about Islam lends itself to creativity and innovation in the social sciences -- rather the opposite.

The book launched us into a discussion about the influence of religion in general. Why are the major religions that still dominate globally all so old? Does religion really drive events or do political leaders use religion to bind and motivate their followers? We agreed that religion as a touchstone of ethical values and as community were probably as important as belief in the supernatural in perpetuating these old and often reactionary institutions.

Posted by Darrell Delamaide at 2:57 PM