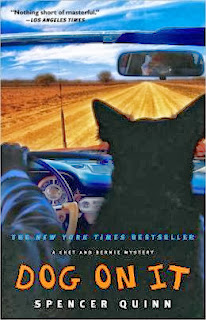 Spencer Quinn's series of detective stories narrated by the dog Chet gives new meaning to the expression, "It's a dog's life." What makes these novels so addictive, aside from just the wit and entertainment provided, is the chance to see life from a dog's point of view. And, as Chet would say, "Life is good." He doesn't have to worry about the finances of the Little Detective Agency being in a mess (his human partner, Bernie, doesn't seem to worry much, either). Such worries as he does have evaporate as soon as a treat or a scent or a pat on the head intervenes. It's nice to put yourself in his paws, so to speak.

In this book, the first of the series, Bernie and Chet have to find a missing teenage girl whose parents are divorced. The plot has some of the same elements as The Sound and the Furry, with Chet at some point being separated from Bernie and at another point playing a key role in rescuing him.

In both cases of separation, Quinn reminds you how vulnerable dogs are in a human world. It is not really that hard to restrain them and once restrained, they are limited in how they can react. Then, if they do manage to escape and rejoin their human master -- as Chet presumably always succeeds in doing -- they can't tell you anything about it.

The climax in both books comes when Chet gets a chance to spring, literally, into action. This of course, as we know from Rin Tin Tin, is where dogs come into their own. Their speed, their strength, their single-mindedness is what makes them such formidable partners. Teeth help, too.

All that said, I will try to take a break from the series, partly to keep from finishing them off too quickly and partly to keep that endearing freshness. I did read the little squib e-short story, "A Cat Was Involved," which fills in the back story of how Chet and Bernie met. However, it was a half-baked effort to cash in on the series popularity and the story actually worked better when it was suggestive, rather than have all the details filled in.
Posted by Darrell Delamaide at 7:58 AM