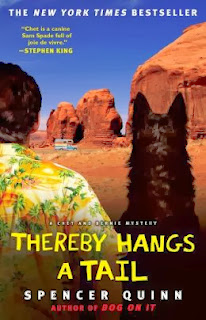 Is Chet the new Archie Goodwin? This fanciful comparison occurred to me reading the third in Spencer Quinn's series of detective stories narrated by Chet the dog.

Chet displays the same wry, deprecating humor that Archie has in narrating Rex Stout's Nero Wolfe mysteries. Like Archie, Chet is slavishly devoted to his brainier colleague. But when it comes to action, it is this narrator who has the upper hand.

Chet drinks only water; Archie drinks only milk. Chet has no life outside his work with Bernie; Archie has very little. Bernie, of course, is more active than Wolfe, but still much of the "leg" work is done by partner Chet.

I've read all of the 70-some Nero Wolfe mysteries and probably would happily read as many Chet and Bernie stories if the author can write that many.

My interest, however, flagged a bit in this third installment, whether from saturation or a drop-off in the quality. The starting point -- acting as bodyguard to a show dog -- was not too exciting. The actual murder mystery developed slowly and haphazardly, with the plot fraying into numerous loose ends that were never satisfactorily tied up.

Nonetheless, it had the elements that make me a fan -- humor, readability, sympathetic characters, Southwest setting (why so coy about telling us whether it's Arizona or New Mexico?).

Two more in the series were on remainder at Politics & Prose so I will try the next one in print. The covers clearly do portray a Border Collie mix, whereas the description of Chet -- from his 100-pound-plus weight to his backstory as a police dog -- mark him as a German Shepherd mix. Only explanation I can think of is the publisher wants a cuter, less threatening dog on the cover.
Posted by Darrell Delamaide at 9:20 AM