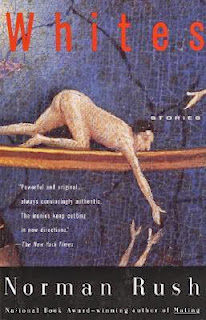 Africa is a confusing place in Norman Rush's short stories. It is confusing for whites, who are disoriented after being uprooted and transported to an alien culture. It is confusing as well for Africans, who feel displaced by the white invasion.

So there is tension, lots of it. Rush's skill as a storyteller brings that tension down to a personal level in his minutely drawn microcosms of the clash between whites and blacks in Botswana. Blacks are always involved, even when the story is about whites. Even "Bruns," the story of a European volunteer who apparently martyrs himself to thwart Afrikaner exploitation of the blacks, is ultimately about the black population, even though the narrator is a white anthropologist telling the story of a white mechanic victimized by white settlers.

"Near Pela" is the claustrophobic tale of two white couples driving through a trench in the bush. The Land Rover is claustrophobic enough, but its confinement in the tracks it must follow makes it even more so. And the vehicle become an emotional hothouse as a woman sympathetic to the plight of blacks caught in a drought and threatened with famine is stonewalled by her husband and gets no support from the other couple.

"Thieving" is an attempt to view white people through the eyes of a native boy. It is the most artificial of the stories as the game attempt to reproduce the language and thought processes of an untutored native fails ultimately to convince. Through a veil, we watch the wife drift completely away from reality, to the point where she has to be institutionalized.

The last three stories all involve Ione, an American woman who relieved the boredom of her life in New Jersey by seducing men and who finds it can help her cope with Africa as well. In "Instruments of Seduction," she seduces yet another fellow expatriate in a fairly desultory manner, because this white man, a doctor, is preoccupied with a hostile encounter he had in an African bar (meaning a bar patronized by Africans rather than just expatriates). In the next story, "Official Americans," Ione plays a supporting role as the mysteriously seductive expatriate who helps an AID worker driven half-crazy by dogs that bark all night to seek relief with a native witch doctor who turns out to be a fake. "Alone in Africa" has Ione finally giving up and fleeing dry, dusty Botswana for more agreeable climes, and hunting grounds, in Italy, leaving her dentist husband alone at home. Frank spends a lonely evening sitting around in a ratty bathrobe drinking wine and is easy prey for a young African woman in the neighborhood to tempt into straying (though Frank claims to be faithful to Ione and is apparently unaware of her hobby).

The moral compass of these whites is spinning hopelessly without any pole to orient them. In our book group discussion, we compared these stories to Paul Theroux's Dark Star Safari and kicked around notions of compassion fatigue and the general difficulty of maintaining empathy in a hopeless situation.

Ultimately, the feeling you get from these stories is that whites don't belong in Africa. Expatriates seem to be largely misfits and they were probably misfits at home, too. On the other hand, Rush seems fatalistic. Whites aren't going to leave, and whites and blacks seem destined to live together in this tension and confusion.

The stories are compelling and finely crafted. The variety of tone and language is stimulating. The unflinching view of an ambivalent environment is daunting, relieved only in part by the mini-catharsis of each story.
Posted by Darrell Delamaide at 9:16 AM