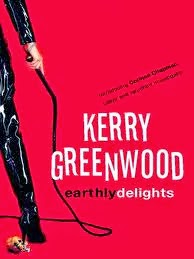 The first book in Kerry Greenwood's Corinna Chapman series was recommended by a friend as a good audiobook for a road trip. It fulfilled that purpose as a light, mildly humorous mystery featuring some good scenes in a bakery and a look at faraway Melbourne.

The main character was generally entertaining. Her apartment house, modeled quirkily on an old Roman building, was studded with equally quirky neighbors. The plot did not shy away from the seedier aspects of Melbourne's drug scene and, briefly, its S&M hangout.

Sound like fun? Not so much. Chapman is something of an anti-heroine -- she's fat, she terribly misses the smoking habit she gave up three years ago, she lives a dull life as a baker that makes her susceptible to a romance that seems so improbable you suspect the guy as the villain [*spoiler alert*] up to the moment the book ends and he's still a good guy.

The over-convoluted plot involves a series of junkie overdoses as someone intentionally or unintentionally is selling heroine too pure for consumption, parallel to an escalating harassment of the women in the apartment building that seems increasingly threatening. There is also the soup truck with Corinna's love interest, the junkie teenager who undergoes a remarkable conversion into an able baker's apprentice, and assorted red herrings from the local witch, a transvestite neighbor and retired wise old professor. If it all sounds a bit contrived, it's because it is.

Nonetheless, it helped pass the time for us on a long drive, and was easier to listen to than some more serious audiobooks we have tried.
Posted by Darrell Delamaide at 4:34 PM