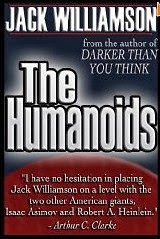 This book group selection of Jack Williamson's classic scifi depiction of a world ruled by robots took me back to a childhood (mis)spent immersed in science fiction. Robert Heinlein, Arthur C. Clarke, Isaac Asimov, Ray Bradbury, Frederik Pohl, Andre Norton -- you name it, I read it. This book, which I may or may not have read, was first serialized in Astounding Science Fiction magazine, which I subscribed to. My first efforts at writing (age 10 or so) were science fiction stories that actually earned rejection slips at the magazines I submitted them to.

Unfortunately, our group felt that this book had been written by someone only slightly older, largely due to the clumsy narrative. Much of the actual language, I felt, was not that bad, but the story and characters are a bit of a jumble, making you feel the author neglected to read the earlier installments as he was writing the next one.

The main issue though -- is man better off coddled and protected from his own worst instincts or is individual freedom preferable even though it leads to unhappy and perhaps even fatal choices -- came through in spite of the writer's shortcomings. To my surprise, there were actually some in our group who thought maybe that Clay Forester at the end of the book, programmed now to accept the humanoids guarding him from actions that might make him unhappy, was indeed better off.

At least it shows the allure of that promise and explains the appeal of Frank Ironsmith, the character who from the beginning embraced the "salvation" brought by the humanoids. For myself, however, and I would have thought for anyone who cherishes free will and individuality, Forester's long resistance to the stifling solicitude of the robots is the more natural reaction.

The group discussed science fiction, robots and Asimov's three laws, and paraphysical phenomena (which plays a subordinate role in the novel). Again to my surprise no one but myself seemed to believe that telepathy, telekinesis or teleportation was really possible, saying there was no evidence that the human mind was capable of such feats.

Who needs evidence when you have imagination?
Posted by Darrell Delamaide at 11:53 AM